The National Constitutional Center is running an exhibition called “Ancient Rome and America – The Classical Influence That Shaped Our Nation.”

The exhibition doesn’t look at America and Rome from the perspective that America is following Rome down the road to perdition. Instead, it showcases “the cultural, political, and social connections between the lost world of ancient Rome and modern America.”

The exhibition is organized into five galleries: Introduction, Building a Republic, A Classical Revival, Expansion and Empire, and Epilogue. It sounds kind of . . . Epilogue???

Epilogue is the “after the story” story. Rome’s epilogue was written sometime in the fifth century AD. Contemporary public opinion is split on whether or not work has already begun on America’s.

At its zenith, the Roman Empire was a military superpower that dominated much of what historians call “the known world.” But Roman influence was much broader than mere military conquest and occupation.

The material culture of Rome – Roman architecture, art, fashion, foods and fads was eagerly embraced by nearly everyone who became part of the Empire – even those who fought against it.

Rome’s citizens were modern, wealthy, empowered and the envy of the known world.

As Rome grew more luxurious and wealthy, its citizens grew more complacent. They imported slaves to do the dirty work - until eventually Romans became the defacto minority in their own state.

No doubt they had slogans like; “We need slaves to do the jobs that Romans won’t do” etc.

Roman manufacturing ground to a halt as the wealthy Romans imported what they needed from elsewhere in the Empire. They became fat, lazy hedonists too selfish to make the sacrifices that once elevated them to the zenith of civilization.

They became completely dependent on foreign labor, foreign goods and foreign entertainment. In Rome’s early days, barbarian tribes that moved into the Empire were accommodated on the basis that they assimilate into the Empire as either Roman subjects or citizens.

Eventually, as Roman hedonism overtook the Logic of Empire, Rome looked the other way as barbarians settled themselves in great blocs in Gaul, Spain, Africa and elsewhere.

No effort was made to assimilate them, (no doubt under mindless slogans such as “unity in diversity.”)

Eventually, the Romans hired the barbarians to police the Empire, creating vast armies that it was ultimately unable to control.

These alien groups formed the breakaway groups that ultimately overran and conquered the Roman Empire from within.

Hence the phrase, “the barbarians within the gates.”

“And in the days of these kings shall the God of heaven set up a kingdom, which shall never be destroyed: and the kingdom shall not be left to other people, but it shall break in pieces and consume all these kingdoms, and it shall stand for ever.” (Daniel 2:44)

America used to be the best the world had to offer. It was the greatest country the world had ever seen – the first country in two millennia to be rightly compared with the Roman Republic.

American products were of a higher quality. American buildings were bigger, safer and the envy of the known world. American freedom was not just an illusion.

Like the ancient Romans, Americans still believe they are the best even as the American Empire begins to crumble for all the same reasons Rome did. America still believes its military is the greatest – but increasingly America is relying on mercenaries to fight its battles for it.

Americans complain about ‘injustice’ – provided they are not asked to do anything to right the ship. The debacle ongoing in Wisconsin sounds more like a morality tale about the decline and fall of the Roman Empire. 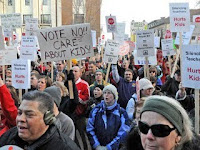 The spectacle of American teachers storming the Wisconsin capital like so many Third World thugs is more than sad. Much more. These are the people that are teaching the next generation.

What are they teaching them? It seems unlikely they are studying much about the rise and fall of the Roman Empire. Or maybe they don’t care – as long as they have theirs.

Alan Simpson, former Wyoming Senator and co-chair of the Obama Deficit Commission has been stumping his deficit reduction proposals on the various cable news talk shows.

Over the weekend, he appeared on Fox News where he suggested that nobody is worried about their grandchildren because they don’t like them:

“This is fakery. If they care at all about their children or grandchildren, and sometimes I doubt that - I think you know, grandchildren now don't write a thank-you for the Christmas presents, they're walking on their pants with the cap on backwards listening to the enema man and Snoopy Snoopy Poop Dogg, and they don't like them!"

I think that Senator Simpson might have something there. . .

Is America the revived Roman Empire the Bible says will be the superpower of the last days? I don’t believe so for the obvious reason that there is already a revived form of the Roman Empire in place in Europe.

We identify the Antichrist as a “prince of Rome” because Daniel says the Antichrist will be a prince of the people that were prophesied to destroy the city (Jerusalem) and the sanctuary (the Temple) – both of which were accomplished in AD 70 by the Roman Empire.

America’s resemblance to Rome is not that of a revived Roman Empire, but rather a picture of Rome in its final stages of decline.

Bible prophecy depicts the empire of Antichrist as the world’s premiere super-power – a place occupied for the time being by the United States of America.

But if the United States of America were to collapse, who stands ready in the wings to replace it? The only logical choice is Europe. America isn’t the revived Roman Empire of prophecy.

But as long as America stands as the world’s premiere super-power, nobody else can be.

The decline of the United States is heartbreaking; its ultimate collapse unthinkable.

Except that now, as this generation winds down to a close, it isn't just students of Bible prophecy that are beginning to discuss the unthinkable in terms of the inevitable.

Epilogue. It's not just for the Romans anymore.