It is the most incendiary spot on planet earth – the bull’s eye in the cross hairs of Mideast rage. Focus on this singular point of earthly geography, however, doesn’t come only from Jews, Christians, and Islamists. There is laser-like anger that burns far more intensely than that generated by ancient human involvements and animosities.

The Temple Mount – Mt. Moriah — in Jerusalem continues to draw the attention of seen and unseen, overtly obvious and clandestine, forces to the one place on this fallen sphere God chose as His touchstone for mankind. UFOs were recently reported by a number of sources to be hovering over as well as descending and ascending above the Dome of the Rock. Footage of video taken from various angles was reported to show strange, glowing orbs gyrating just above the Muslim shrine where the religion of Islam claims the prophet Mohammed one night rode on his horse from the now-covered stone into their version of heaven. Things going on around the golden dome and its rock, however, are more often than not at the center of much more down-to-earth controversy.

This excerpt of a news item frames the most recent activity fueling the tempest atop Moriah:

Muslim religious authorities are concluding a clandestine eight-month dig on the Temple Mount that is intended to erase traces of the Jewish Temple's Altar, Temple activists charge.

The digs have been taking place under the Dome of the Chain, believed to have been built over 1300 years ago. For eight months, the dome - which has a diameter of 14 meters - has been surrounded by a metal fence and black cloth, which hide whatever activity has been going on there from outside inspection. The Muslim Waqf religious authority has claimed the activity is simply a refurbishing of the structure, but refuses adamantly to let Jews or tourists near.

Jewish activists made various attempts to enter the Dome, but met with no success…

Our Temple Mount [a news outlet] notes that according to Jewish tradition, the place where the Dome of the Chain is located is the spot upon which the sacrificial Altar stood in Temple times. Temple activists said that the Muslim digs are intended to erase the Jewish connection to the Temple Mount. (Gil Ronen, 'Digging on Temple Mount to Erase Traces of Jewish Altar,' IsraelNationalNews.com, 2/7/11

The digs are a decades-long part of efforts by the Islamists to remove artifacts that might prove Israel’s link to the Temple Mount. There are worries by some Israeli engineers that so much digging and tunneling has been done beneath some sections of Moriah that part of the mount could collapse. Should that take place, and the Dome of the Rock or other shrines considered sacred by Muslims be damaged, fears are that such an occurrence could provide a reason for blaming the Jews. Thus a rallying point for instigating yet another war by a joint Arab coalition could be established. 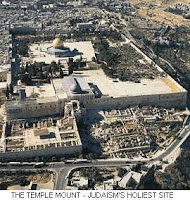 Strange circumstances have always surrounded this promontory where the Jewish temples sat housing the Holy of Holies and the Ark of the Covenant. It is the very center – geographically speaking - of God’s salvation process for mankind. The Holy of Holies was the 15-foot cubed room where the heavy veil that separated God's presence from fallen human beings was ripped from top to bottom by the hand of the Almighty at the moment when Christ cried “It is finished!” and gave up His Spirit to death as the supreme sacrifice for the sins of all mankind. Because of reason behind that renting of the veil, all people now have direct access to God through His Son, Jesus.

The second Temple – known as Herod’s Temple by some, was destroyed in A.D. 70 when the Romans destroyed Jerusalem and razed the building to extract every jewel and precious metal they could find from the ruins. The Muslims claimed the Mount centuries later and erected their shrines, claiming it for Allah based upon Mohammed’s supposed adventures – the night flight to heaven from the large, flat stone that the Dome of the Rock now covers.

Israeli General Moshe Dayan, for reasons that are still a mystery, gave Jerusalem’s religious leaders of Islam the right to act as overseers of the Temple Mount, following the Israeli victory over Arab military forces in the 1967 Six-Day War. The tensions over access to the Mount have increased ever since, with the Muslim factions digging - it has been established — to try to remove all evidence that the temples ever stood there.

Behind the building tempest is God’s most vicious enemy. He seethes with contempt for the Creator of all things. He hates everything associated with Jesus Christ, who died just outside the Temple area so that human beings – whom he hates, also - can be redeemed and reconciled to God, the Heavenly Father. Bible prophecy foretells that during the time of Jacob’s trouble (Jeremiah 30:7), Satan will bring his man, Antichrist, to sit in a rebuilt Temple atop the Temple Mount (2 Thessalonians 2:4). That “man of sin” will declare himself to be God and demand worship on penalty of death to those refusing to comply. All will have to obey by accepting the Beast’s (Antichrist’s) number and mark, or be beheaded - or no doubt die in other ways even more horrendous.

The Temple Mount is the one place on earth most coveted by Lucifer the fallen one, known now as the devil. Satan - as he is also known - couldn’t usurp the throne of God in heaven, and is determined to usurp God’s earthly throne, where God has promised that His Son, Jesus Christ, will one day rule and reign over the millennial earth.

The Temple Mount tempest continues to mount. Israel, Jerusalem, the Temple Mount, and the ongoing attempt by the diplomats of earth to try to force a false peace covenant upon God’s chosen people, the Jews, should be at the center of attention of every Bible-believing observer of these troubling although exciting times.

Jerusalem Dome of the Rock UFO Video May Be Dud - Aquapour

Gaddafi calls on Palestinians to rise against Israel - Jerusalem Post

Below the Western Wall, passage to a cherished history - Boston Globe