Barack Obama has declared that all opposition groups should have representation in the next Egyptian government, which essentially ensures that the Muslim Brotherhood will be part of that government. The Brotherhood is the largest opposition group in Egypt, so it will probably end up in the driver’s seat in any new regime, and steer Egypt toward becoming an Islamic state inveterately hostile to the United States.

So why isn’t Obama working to limit the Brotherhood’s scope and influence? Maybe because he doesn’t really have a problem with the Brotherhood, despite its hostility to America. He made sure to invite Brotherhood leaders to attend his notorious speech to the Islamic world in Cairo, Egypt, in June 4, 2009. Starting in the earliest days of his administration, he showed an intense desire to establish friendly ties with Brotherhood-linked organizations — despite the Brotherhood’s stated goal of “eliminating and destroying Western civilization from within.”

Obama first reached out to the Brotherhood when he chose the leader of a Muslim Brotherhood-linked group that had been named an unindicted co-conspirator in a Hamas terror funding case to give a prayer during his inauguration ceremonies. Ingrid Mattson, then-president of the Islamic Society of North America (ISNA), offered this prayer at the National Cathedral on Obama’s Inauguration Day — despite the fact that the ISNA has admitted its ties to the Brotherhood. The previous summer, federal prosecutors rejected a request from the ISNA to remove its unindicted co-conspirator status.

Obama didn’t ask Mattson to explain the ISNA’s links to the Muslim Brotherhood and Hamas. On the contrary: He sent his senior adviser, Valerie Jarrett, to be the keynote speaker at the ISNA’s national convention in 2009. 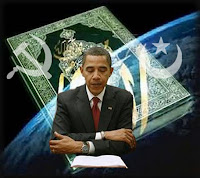 Even worse, in April 2009, Obama appointed Arif Alikhan, the deputy mayor of Los Angeles, as assistant secretary for policy development at the Department of Homeland Security. Just two weeks before he received this appointment, Alikhan (who once called the jihad terror group Hezbollah a “liberation movement”) participated in a fund-raiser for the Muslim Public Affairs Council (MPAC). Like the ISNA, MPAC has links to the Muslim Brotherhood. In a book titled In Fraternity: A Message to Muslims in America, co-author Hassan Hathout, a former MPAC president, is identified as “a close disciple of the late Hassan al-Banna of Egypt. "The MPAC-linked magazine The Minaret spoke of Hathout’s closeness to al-Banna in a 1997 article:

The late al-Banna, of course, was the founder of the Muslim Brotherhood.

Terror researcher Steven Emerson’s Investigative Project has documented MPAC’s indefatigable and consistent opposition to virtually every domestic anti-terror initiative. Its magazine The Minaret has dismissed key counterterror operations as part of “[t]he American crusade against Islam and Muslims.” For his part, while Alikhan was deputy mayor of Los Angeles, he blocked a Los Angeles Police Department project to assemble data about the ethnic makeup of mosques in the Los Angeles area. This was not an attempt to conduct surveillance of the mosques or monitor them in any way. LAPD Deputy Chief Michael P. Downing explained that it was actually an outreach program:

“We want to know where the Pakistanis, Iranians, and Chechens are so we can reach out to those communities.”

But Alikhan and other Muslim leaders said that the project manifested racism and “Islamophobia,” and the LAPD ultimately discarded all plans to study the mosques.

The Muslim Brotherhood is a pro-Sharia group. Obama’s chief adviser on Islamic affairs, Dalia Mogahed, is a pro-Sharia Muslim. In their Gallup survey published under the hubristic title "Who Speaks for Islam? What A Billion Muslims Really Think," Mogahed and Saudi-funded dhimmi, or non-Muslim, pseudo-academic John Esposito cooked their data to increase the number of Muslim “moderates,” counting as “moderate” Muslims who wanted Sharia rule, hated America , supported jihad-martyrdom suicide bombing, and opposed equality of rights for women. Mogahed also defended Sharia on a British TV show.

With Brotherhood operatives in the American government and working closely with it, thanks to Barack Obama, it’s no surprise that he would have no problem with their being part of the Egyptian government too.

The Brotherhood Amongst Us - FrontPage Magazine (Nonie Darwish)