The scattering of the Jewish people from the land of Israel throughout the nations of the world was a result of their disobedience to God’s law and their rejection of the Messiah.

The first dispersion, as mentioned in a prior article, was the Assyrian and Babylonian captivity (721 and 586 B.C., respectively). The reason for this, as unanimously witnessed by both the preexilic and exilic prophets, was Israel’s gross idolatry and apostasy from the Lord (Jeremiah 7, 9; Isaiah 1-6; Ezekiel 8-11, et al.). The second dispersion occurred for Israel’s rejection and mistreatment of the Messiah who came to redeem them and offer the Messianic kingdom (Luke 19:41-44).

But in the beginning of their national history, God foretold all these things would happen as a warning to the nation through Moses, right before the people of Israel were to enter the Promised Land. In Leviticus 26 and Deuteronomy 28-32, Israel’s covenantal obligations as the Chosen Nation of God are spelled out by the Lord. The blessings that would accrue to their obedience are given and conversely the curses that would fall on them if they chose to walk contrary to the Lord and not obey Him were clearly spelled out to the nation. A cursory reading of these pivotal chapters at once reveals a precise and accurate prophetic portrait of the history of the Jewish people that has been fulfilled to the letter for the last 3,500 years!

This scattering of Israel to all the Gentile nations of the world would serve as a sign for all to see God’s reproach and displeasure for their disobedience to Him.

“And they shall be upon you for a sign and a wonder, and on your descendants forever.” (Deut. 28:46)

Lest the reader think this too harsh, the Kiddush (the standard daily prayer book used by religious Jews in synagogues all over the world) offers the following penitential prayer:

“Cause us to return with perfect repentance to Thy presence. Pardon and forgive all our iniquities. Blot out and remove our transgressions and sins from Thy sight. Nullify the evil of the sentence decreed against us.”

Now in our day with the recent partial restoration and regathering of the Jewish people back to Israel, God is in the process of answering this very prayer. Throughout the long Diaspora, God promised that He would preserve the Jewish people as a distinct people among the Gentile nations so that by and large they would not be assimilated or be expunged by them.

“For I am with you, says the Lord, to save you. Though I make a full end of all nations where I have scattered you, yet I will not make a complete end of you. But I will correct you in justice, and will not let you go altogether unpunished. Yet I will leave a remnant, so that you may have some who escape the sword among the nations, when you are scattered through the countries.” (Jeremiah 30:11; Ezekiel 6:8)

The Assyrians, Babylonians, and the Romans all invaded Israel and conquered the Jews and subsequently led them captive away from the land to be scattered throughout the nations. After the dispersion of 70 A.D., the Jewish people were to live without a homeland for almost 2,000 years. 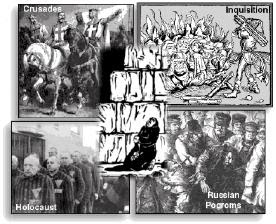 All throughout that time they only survived in small numbers in isolated scattered communities. Their numbers greatly dwindled when they were hunted down and killed by the scores during the Crusades, the Inquisition, the Russian Pogroms, and the greatest of all numbers killed in the horrific Holocaust. This is precisely why most Jewish people do not accept Jesus as the Messiah because those very people who claimed to follow Him instigated and carried out these violent campaigns and atrocities against the Chosen People. Sadly the tragic prophecy of Jesus in John 16:2 has been fulfilled in one way through the form of ‘Christian’ anti-Semitism when He foretold to His Jewish disciples:

“The time is coming that whoever kills you will think he offers God’s service.”

The enemies of the Jews slanderously did so in the name of Jesus Christ — a sin the Christian Church has all been too guilty of throughout the centuries. On this point Messianic Jewish author Barry Rubin explains what the Gentile name “Jesus Christ” means to the average Jew: