A week following a federal judge's decision to hold the Interior Department in contempt for ignoring a ruling to stop the drilling moratorium in the Gulf of Mexico, an expert at The Heritage Foundation looks at what lies ahead. 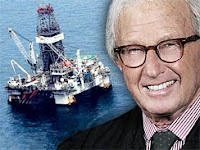 "Right now, we're at a point where we haven't seen this before, where the federal court system is actually striking down the administration's attempts to ignore it," reports Rory Cooper, director of communications for The Heritage Foundation.

He says the court will try to force the administration to pay the penalty, as its actions are symbolic and show that President Obama "has a problem with free markets" and energy.

"[President Obama] has a very anti-energy agenda, and it's causing the rolling blackouts in Texas and New Mexico," Cooper explains. "It's going to cause gas prices to go up, it's going to cause small businesses not to be able to hire people - and it's all based off of a fantasy of alternative and renewable fuels being available on the market in the next couple of years."

Cooper made his comments this week on American Family Radio's Nothing but Truth program with Crane Durham.

When will the GOP go after Obama for his crimes? - RenewAmerica.com (Edward Daley)