War Could Result from Historic Referendum Vote Underway in Sudan

Please pray for the people of Sudan. This week, those in southern Sudan are voting on a referendum that would separate them from the Radical Muslim regime that runs the north and would give the south independence. But such a move could also lead to a bloody civil war. Sudanese President Omar al-Bashir, an Islamic extremist, says the south is not ready for independence and warns of severe instability. Secretary of State Clinton has warned of a “ticking time bomb” in Sudan. Some Obama administration officials have feared “cataclysmic bloodshed.”

By God’s grace, these fears will not materialize, but Sudan is a country to watch carefully and to pray for regularly, especially this week. Its people have been devastated by war, famine and genocide in recent decades. What’s more, Sudan is a country mentioned as “Cush” in the prophecies of Ezekiel 38-39 that will align with Russia, Iran, and others against Israel in the “last days.” As a result, its government and military will face severe judgment for cursing Israel.

“As voters continued flooding the polls on Monday for a landmark referendum on southern Sudan’s independence, officials said more than 40 people had been killed over the weekend in intense skirmishes in a contested area along Sudan’s north-south border,” reports the New York Times. “The voting, which began Sunday, is proceeding jubilantly and remarkably smoothly, with high expectations and few serious complaints anywhere across southern Sudan. But if the referendum passes and the south breaks off from the north, the disputed border will become the next issue to resolve, and some fear that the specter of an all-out border war is rising. 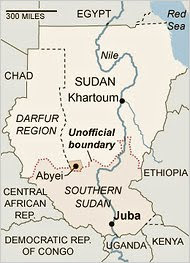 Abyei, where skirmishes broke out Friday and Saturday, is considered the most combustible and intractable of all the disputed areas. Both the north and the south claim historical ties to it and are refusing to budge. Some Western analysts have called Abyei ‘Sudan’s Jerusalem.’ Most people here in Juba, the southern capital, were unaware of the rising tensions along the border, which is several hundred miles away. Voters continued to pour into polling places on Monday, to dance, whistle and sing, and to talk excitedly about how secession will bring new bridges, new roads, new schools, new hospitals, new jobs, even new food….”