Two Global Strategists, Both Advisors to President Obama, Call for the United States to Break Ties with Israel

George Friedman, the publisher of Stratfor, a newsletter on strategic global planning, in his most recent book, "The Next Decade" has called for the Obama administration to have the United States break ties with its main Middle East ally Israel, and increase its cooperation with the Islamic world, especially Iran and Pakistan. Friedman's comments are in concert with a former consultant to President Obama, Tony Cordesman, who argues that the United States strategic alliance with Israel was harming Washington's interests in the Middle East.

Friedman said that Washington has been in a confrontation with the Islamic world, which consists of 1 billion people, and a decline in US support for Israel was vital for what he termed the survival of the United States empire. 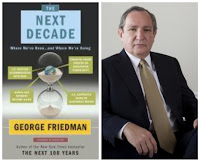 George Friedman and Tony Cordesman, both not household names, but major players in United States strategic planning have called for the Obama administration to reorder its foreign policy in the Middle East and begin by breaking ties with Israel, America's long time strategic partner in that region. In essence, both men believe that the United States confrontation with the Moslem world - because of America's war with Al Qaeda - has brought harm to the American empire's ability to survive over the next decade. Friedman, in his recent book "The Next Decade" says that the United States must develop a greater partnership with Iran and Pakistan instead of the Jewish state of Israel.

The ancient Jewish prophets wrote 2500 years ago that God would destroy those Middle East nations that try and eliminate Israel from the face of the earth - that is found in Ezekiel 38 and 39 where both Iran and Pakistan are mentioned in Ezekiel 38:5 as Persia. God told Abraham 4000 years ago in Genesis 12:1-3 that those who bless Israel will be blessed and those who curse Israel will be cursed - that principle is still applicable today. Since the United States is not found in Bible prophecy, one can conclude that America will not be a major factor before the return of Jesus Christ to the earth.

If America takes the advice of strategic global planners over the Bible that can be assured that God will deal with them. Bible prophecy will be fulfilled.

The mule and the lamb - World Magazine