A move to defund Planned Parenthood has been initiated by a few conservative lawmakers in Washington, DC.

Freshman Congressman Tim Huelskamp (R-Kansas) made this controversial policy proposal his first order on January 19. He offered remarks on the floor of the House discussing abortion and the alternatives to killing the unborn. He shared his family's experiences in adopting four children.

Early in the session, Huelskamp - along with Congressman Mike Pence (R-Indiana) and several other co-sponsors - is working to stop taxpayer dollars to fund abortions.

"In the last couple of years, there have been a number of efforts to defund Planned Parenthood at the federal level," he tells OneNewsNow. "I've of course led the efforts here in the state of Kansas for a number of years. But we are trying that effort in Washington as well - and I think we have an excellent opportunity to get that done and making certain that our taxpayer dollars are not sent to the largest abortion-provider in the nation, perhaps the world...and that's Planned Parenthood." 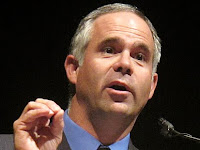 Huelskamp said the government needs to lead the way in suggesting alternatives to abortion.

"A bill has been introduced [and] they'll probably have a hearing on it sometime in the next month," says the freshman congressman. "But most importantly, when we go through the budget process in the U.S. House of Representatives, there will be an effort in the committee to simply defund Planned Parenthood....in the budget for the coming year - and we can do that directly in the House without having the approval of the president because he does not have a line-item veto if we strike out funding for that abortion-provider."

According to Planned Parenthood's most recent report, it received more than $363 million in revenue from government grants and contracts for the year. Congressman Pence says that amounts to approximately one-third of the group's funding coming from taxpayer dollars.

"The manner in which Planned Parenthood promoted abortion is inappropriate for an organization that receives [that amount] of its funding from the federal government," he writes in a letter to his constituents. "...This is our chance to defend the sanctity of life by defunding the federal government's backhanded support of abortion once and for all."

He points out that a section of Planned Parenthood's website lists the three options for pregnant teens: abortion, adoption, and parenting - in that order.

Stand For Life: Remembering The Past And Looking Forward - Human Events (Michele Bachmann)

In His Own Words: A Radical Pro-Abortion President - AlbertMohler.com