Obama Will Not Veto U.N. Assault on Jewish Construction

The Obama administration told the Palestinian Authority it will not veto an upcoming United Nations resolution condemning all Jewish construction in the West Bank and eastern sections of Jerusalem, a senior PA official told WND.

If the U.S. does not veto the resolution, such abstention largely would be unprecedented. Traditionally, the U.S. has vetoed such resolutions, which have been deemed anti-Israel.

The senior PA official also told WND the U.S. signaled to the European Union it would not object if the EU follows the recent lead of Latin American countries in unilaterally recognizing a Palestinian state outside of negotiations with Israel.

A draft of the U.N. resolution already has been circulated to all 15 members of the U.N. Security Council. It currently deems Israeli construction in the West Bank and eastern Jerusalem as "illegal."

However, in a nod to Prime Minister Benjamin Netanyahu, the U.S. has been trying to change the language to condemn the Jewish construction as "illegitimate."

Still, PA officials said they were told by the Obama administration that the U.S. will abstain, particularly if the language is changed to "illegitimate." 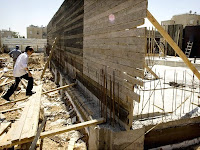 The Obama administration long has focused on Jewish construction in the West Bank and eastern sections of Jerusalem. It has demanded Netanyahu freeze all Jewish building projects in those areas as a precondition for restarting negotiations with the Palestinians.

Talks between Israel and the PA have been largely stalled. Instead, the PA has focused on a diplomatic campaign of encouraging other countries to officially recognize a Palestinian state despite the lack of progress in talks with Israel.

Earlier this week, Ireland upgraded the Palestinian delegation in Dublin to the status of a mission in a clear sign Europe is inching closer to unilaterally recognizing a Palestinian state.

PA sources tell WND that a number of EU countries are expected to make similar moves in the coming weeks.

Last week, Peru, which has upgraded its relations with Iran, recognized a Palestinian state, becoming the eighth Latin American country to make such a move.

The U.S. publicly has called such declarations premature.

U.S. Undersecretary of State William Burns said, "It's only through negotiation between the parties themselves, Palestinians and Israelis, that we'll be able to realize the two-state solution."

Still, top PA officials told WND the Obama administration has not been discouraging the unilateral recognition behind the scenes.

One senior PA official said the U.S. also signaled to the EU it would not discourage such unilateral recognition on the part of a European country.

The PA officials said the individual recognition of a Palestinian state is part of a larger diplomatic plan aimed at bringing a U.N. Security Council resolution officially recognizing a Palestinian state by next summer, when Obama will already be considered a lame duck president and would have less to lose by voting for such a measure.

The threat to create a Palestinian state using a U.N. vote is not new.

In 2009, Ahmed Qurei, former PA prime minister and member of the Palestine Liberation Organization executive committee, told WND in an interview that the PA "reached an understanding with important elements within the administration" to possibly bring to the U.N. Security Council a resolution to unilaterally create a Palestinian state.

Asked to which "elements" he was referring, Qurei would only say they were from the Obama administration.

PLO calls on Quartet to support condemnation of settlement - Xinhua