Obama Administration officials were quoted by Arabic media on Sunday as saying all US foreign aid to Lebanon will cease if the Hizballah ends up controlling the government in Beirut.

Hizballah brought down the Western-backed government of Prime Minister Saad Hariri last week, and appears poised to either score a major victory in upcoming elections or to use its superior military forces to seize control of the country.

Hizballah had been part of Hariri’s government, and was even granted veto powers as part of a coalition deal signed last year.

Christian leaders in Lebanon are panicked over what will happen to their country in the coming weeks. Samir Geagea, leader of the Christian Lebanese Forces, warned at a Beirut press conference on Saturday that Hizballah will “turn Lebanon into Gaza,” referring to the current state of the Palestinian-controlled coastal strip after it came under the sway of Hamas. 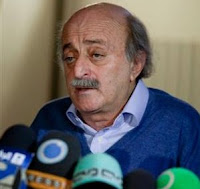 Walid Jumblatt, whose Druze community is smaller and weaker than the Christians, apparently felt he must side with the stronger of the two opposing forces, and threw his lot in with Hizballah. Jumblatt’s backing may tip the scales in Hizballah’s favor when the Lebanese parliament meets on Monday to pick a new prime minister.

Israeli Vice Prime Minister Silvan Shalom on Saturday said these developmens had removed all doubt that Lebanon is now a satellite of Iran, which sponsors and even gives orders to Hizballah.

The situation in Lebanon also provides further evidence of why a Palestinian Arab state is a bad idea. Israel can sign nicely-worded agreements with the Palestinian Authority today, but there is no guarantee that Hamas will not tomorrow seize control of the entire Palestinian state and all the money and weapons the Americans have poured into it.

That has already happened once in the Gaza Strip, though the geography of the region has kept the terror group somewhat contained. Were it to happen in a fully sovereign Palestinian state incorporating Judea, Samaria and eastern Jerusalem - and all indications are that it would - then Israel would be facing a new existential threat.

Iran Changes the Balance of Power in Lebanon - Right Side News