Q: I recently heard the term "progressive Christian" in conjunction with some controversial speakers, Jim Wallis and Shane Claiborne, at a Lifest Music Festival. I'm not familiar with the term or the controversy surrounding the speakers. What can you tell me?

A: Jim Wallis and Shane Claiborne's beliefs place them among socialist, or "progressive," Christians who advocate deeds and actions that they believe will achieve justice and peace upon the earth. Wallis is the founder and editor of Sojourners magazine. He oversees a Washington, D.C., Christian community of the same name and is one of President Obama's spiritual advisors. Claiborne studied under Tony Campolo at Eastern University, did a 10-week internship with Mother Teresa in India, and later started a "new monastic" community in Philadelphia that ministers to the poor.

Claiborne's Christianity majors in "good works" yet is rooted in the experiential, often expressed through mysticism. His frequent ecumenical statements speak of a "mystical" bonding between "people of faith":

Rarely are people converted by force or words, but through intimate encounters. Perhaps one of the best things we can do is stop talking with our mouths and cross the chasm between us with our lives. Maybe we will even find a mystical union of the Spirit as [Saint] Francis [of Assisi] did. [1]

Since mysticism is completely subjective and experiential, it lends itself to Claiborne's openness to those whose beliefs are contrary to Scripture (e.g., Mother Teresa and Francis of Assisi, who put their faith in the false gospel of Roman Catholicism):

"One of the barriers [between religions] seems to be the assumption that we have the truth and folks who experience things differently will all go to Hell. How do we unashamedly maintain a healthy desire for others to experience the love of God as we have experienced it without condemning others who experience God differently?" [2]

Jim Wallis says his mission "...is to articulate the biblical call to social justice, inspiring hope and building a movement to transform individuals, communities, the church and the world." Wallis, viewed as a Marxist by his critics, doesn't shy away from the label. He stated that "private charity to help the poor was insufficient, and...true social justice could be achieved only by an omnipotent central government empowered to redistribute wealth" [3] 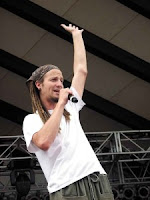 At the Lifest Music Festival, Claiborne proclaimed to a crowd of thousands of young people,

"As my friend Jim Wallis...says, 'We look at the world and we don't believe the evidence of poverty and war. We believe despite the evidence, and we watch the evidence change'....I am so excited today, because I see a whole generation like you guys, who are totally nonconformist to the patterns of this world."

His influence among young evangelicals is growing rapidly, especially among those who want more from their Christianity than their consumer-oriented and spiritual-education-by-entertainment-dispensing churches fed them. The problem is that too few of our young people have been taught to be "conformist to the patterns" of God's Word rather than "this world."

Some of Claiborne's agenda toward the poor is commendable and may be well suited to social welfare programs such as the Peace Corps or UNESCO, but it does a terrible disservice to the biblical gospel. "Biblical" needs to be underscored here because the gospel has specific content that can only be derived from the Bible. The gospel is what the Bible is all about. It is God's way of salvation, of which an understanding and an acceptance - by faith alone in Christ alone - are necessary for a person to receive the gift of eternal life. Since the gospel has an eternal objective (e.g., it is a person's only means for spending eternity with God), there is nothing of temporal significance that should be given priority over it.

The history of the social works-oriented gospel, of which so-called progressive Christians Wallis and Claiborne are only two of the latest representatives, is a testimony to what may have begun with sincere intentions or even "in the Spirit" (Galatians 3:1-3) but has degenerated into various forms of works-salvation, which constitutes "another gospel" (Galatians 1:6-9) - a gospel, of course, that can save no one. When "good works" take priority over the clear proclamation of the gospel by preaching and teaching, they become a leaven that ultimately subverts the gospel. Good works can only result from salvation - they are the cart that follows the horse. When the cart leads, the horse is in serious trouble.

The Apostle Paul was adamant about the necessity, power, and priority of the gospel versus man's methods of "good" works:

"For I determined not to know any thing among you, save Jesus Christ, and him crucified. And I was with you in weakness, and in fear, and in much trembling. And my speech and my preaching was not with enticing words of man's wisdom, but in demonstration of the Spirit and of power: That your faith should not stand in the wisdom of men, but in the power of God" (1 Corinthians 2:2-5).

Claiborne and Wallis are regarded in some circles as champions of alleviating the plight of the poor and as stalwarts against social injustice. We take no issue with such works as long as what is attempted is in keeping with the Word of God. Jesus said,

"For ye have the poor with you always, and whensoever ye will ye may do them good" (Mark 14:7).

"Let us not be weary in well doing: for in due season we shall reap, if we faint not. As we have therefore opportunity, let us do good unto all men, especially unto them who are of the household of faith."