Israel Watches with Concern as Egypt Teeters on the Brink

While Prime Minister Benjamin Netanyahu ordered his government to refrain from commenting publicly on the situation in Egypt, Israelis watched with concern as the regime of Egyptian President Hosni Mubarak appeared ready to collapse, and wondered what that will mean for the Jewish state.

Over the weekend, a large number of Egyptian troops that went into Cairo to quell the uprising actually ended up joining the protestors, even allowing them to ride on their tanks. The pictures in local Middle East newspapers gave the impression that Mubarak’s downfall was a foregone conclusion. 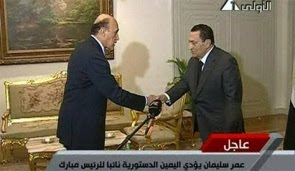 Mubarak has already appointed his first ever vice president, Egyptian intelligence chief Omar Suleiman, in an effort to calm the waters and demonstrate that he is not trying to create a dynasty.

Suleiman is well respected in Egypt, even by the opposition, and has kept himself largely clean of the corruption that has characterized Mubarak’s government. But Suleiman is also old at 74, and he has dealt roughly with Islamic extremists in the past, meaning that even if he did take over, it likely wouldn’t mean an end to the unrest.

The other possibility that everyone is talking about is that the Muslim Brotherhood, the forerunner of the Palestinian Hamas, will take over. Experts have noted that the Brotherhood is the only large organized opposition force in Egypt, so if the Mubarak regime falls completely, the likelihood of a Brotherhood takeover is high.

If that scenario plays out, there are many that fear Egypt will go the route of the 1979 Islamic Revolution in Iran. The only thing that is currently missing is a charismatic Islamic figurehead. Iranian leaders on Saturday said they were pleased with how things are going in Egypt, and said they felt the revolution there had been inspired by their own.

An Egypt controlled by the Muslim Brotherhood would suddenly become the greatest regional threat to Israel, and precipitate a major restructuring of the IDF operational policies and a beefing up of Israeli forces in the south of the country.

If it gains control of Egypt, the Muslim Brotherhood would be in command of the Arab world’s largest and most powerful military, built on a foundation of advanced American weaponry.

It would mean Israel would have to seriously consider facing a major war on two fronts, something it has not had to do since the 1973 Yom Kippur War.

INSIDE THE EGYPTIAN REVOLUTION: VIOLENCE IS RISING BECAUSE THE MUSLIM BROTHERHOOD IS COOPTING THE MOVEMENT: An analysis of the rapidly changing dynamic - Joel C. Rosenberg's Blog