“Officials say Iran already has enough low-enriched uranium stockpiled to create as many as four atomic weapons if it decided to further process the fuel,” reports the Wall Street Journal this morning. “The U.S. and the IAEA also worry Iran could have deployed advanced centrifuges at clandestine sites.”

To put this in context, in September 2009, Israel’s former Ambassador to the U.N. Dore Gold told me that the latest U.N. report indicated Iran had enough low-enriched uranium (LEU) to build two nuclear bombs, should it take the LEU to 90%-plus weapons purity.

That said, evidence continues to surface in the media that economic sanctions and covert operations to slow down Iran’s development of nuclear weapons are working. Iran may have the LEU, but it doesn’t seem to have the other materials needed to actually build or test atomic bombs it would seem — at least not yet. Last week, the outgoing head of the Mossad said he felt Iran wouldn’t likely be able to build operational nuclear weapons until 2015. Washington officials, therefore, believe the likelihood of an Israeli war with Iran over the nuclear issue has declined somewhat in the near-term.

“The Obama administration has concluded that Iran’s nuclear program has been slowed by a combination of sanctions, sabotage and Iran’s own technical troubles,” noted columnist David Ignatius in yesterday’s Washington Post. “Because of the delay, U.S. officials see what one describes as “a little bit of space” before any military showdown with Iran…. A senior Obama administration official [said], ‘They’re not moving as fast as we had feared a year ago’…. This new assessment of Iran’s nuclear setbacks has lowered the temperature on what had been 2010′s hottest strategic issue. Last summer, Jerusalem and Washington were talking themselves into a war fever, prompted in part by a powerful article in the Atlantic by Jeffrey Goldberg that starkly described the likelihood of military action. This fever seems to have broken.”

Indeed, Israeli covert efforts to stop Iran appear to be working so well that Iran is trying hard to strike back. A Reuters wire story notes that “Iran has arrested a ‘network of spies’ linked to Israel’s Mossad intelligence service which it blames for the assassination of an Iranian nuclear scientist in 2010, Iran’s state television reported on Monday…. Under Iran’s penal code, imposed since its 1979 Islamic revolution, espionage can carry the death penalty. In December Iran hanged an Iranian man convicted of spying for Israel. Another Iranian man was hanged in 2008 for allegedly working with Mossad. Israel denied having any links with the case.”

Is this true, or Iranian propaganda? This remains to be seen. The Iranian regime has been deeply embarrassed by recent revelations that its nuclear program has been severely slowed down by covert operations, including the Stuxnet computer virus, the assassination of senior Iranian nuclear scientists, defections by key scientists and other sabotage efforts, all presumably masterminded by various Western intelligence agencies, including Mossad and the CIA. Sometimes, Iranian officials have been known to arrest people and charge them with espionage to make big, splashy headlines, only to later release the accused when it’s clear there is no real evidence against them. Over the weekend, for example, CNN reported that Iran deported an American woman after dropping trumped up espionage charges against her. 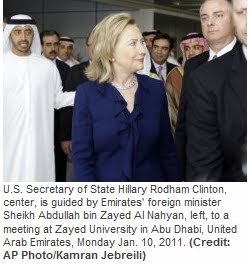 In related news, “U.S. Secretary of State Hillary Clinton dismissed on Sunday Israeli assessments of delays in the Iranian nuclear program and called for more work on sanctions to bring Tehran to heel,” reported Haaretz. “Clinton, on a tour of Gulf Arab countries to shore up support for pressure on Iran, arrived in Abu Dhabi, the capital of the United Arab Emirates. She will also visit Dubai, Oman and Qatar on the five-day trip…. Clinton said a recent assessment by the retiring chief of Israel’s Mossad intelligence service that Iran would not be able to build an atomic bomb until at least 2015 should not undercut international determination to keep the pressure on Iran through sanctions and other means to come clean about its atomic work. ‘The timeline is not so important as the international effort to try to ensure that whatever the timeline, Iran is not pursuing nuclear weapons,’ Clinton told reporters on her plane as it arrived in Abu Dhabi. ‘I don’t know that it gives much comfort to somebody who is in the Gulf, or who is in a country that Iran has vowed to destroy, that it’s a one-year or a three-year timeframe.’”