Happy New Year to the Trees!

I know that the 2011 New Year's celebration is already a few weeks old by now but this week on the Jewish calendar, we actually celebrate another entirely different New Year … this time for trees. Really!

This "New Year" is a minor Jewish festival known as Tu B'shevat, meaning the fifteenth day of the Hebrew month of Shevat. It is spoken of in the Talmud as Rosh HaShanah La'Ilanot, or New Year of the trees. The holiday, celebrated this year on Thursday January 20, serves as a Jewish version of Arbor Day. Traditionally, we celebrate the day by planting trees and eating various fruits and nuts in accordance with Deuteronomy 20:19, "... for the tree of the field is man's food." Some people even celebrate with a Seder meal, not unlike the Seder meal that is part of Passover. 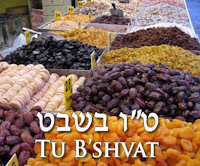 Of all the Jewish communities in the world, Tu B'shevat is by far most widely celebrated in Israel, where planting trees has been extremely important in the process of reclaiming and revitalizing that once arid and barren land. The Jewish National Fund has taken on much of the responsibility of reforestation in Israel. Many tourist groups, Jewish and Christian alike, take the opportunity to help in that process by purchasing trees to plant in Israel's forests. The last time I was in Israel, I had the privilege of planting trees in honor of Moishe and Ceil Rosen. The devastating fire in the Mount Carmel region lately probably lends even more importance to Tu B'shevat this month.

Trees are indeed important for many different reasons. Today I was driving to the Amtrak station in Washington D.C. The night before, a couple of inches of snow had fallen and was still clinging beautifully, almost magically, to the branches of all the trees lining both sides of the Potomac River. It was a majestic sight that reminded me of the artistry of our great Creator God.

Isn't it interesting that trees play such a prominent role in God's purposes for His creation? In the Garden of Eden, trees were a symbol of God's grace and provision for humanity — except for one special tree that served as a boundary between obedience and disobedience. God used that tree to instruct and to warn:

"And the LORD God commanded the man, saying, 'Of every tree of the garden you may freely eat; but of the tree of the knowledge of good and evil you shall not eat, for in the day that you eat of it you shall surely die'" (Genesis 2:16-17).

Likewise, the apostle John's vision of our eternal home in the New Jerusalem showcases the description of a tree that is truly wonderful beyond imagination and beyond anything we have seen on this earth:

"In the middle of its street, and on either side of the river, was the tree of life, which bore twelve fruits, each tree yielding its fruit every month. The leaves of the tree were for the healing of the nations" (Revelation 22:2).

From beginning to end we can see that our Creator God uses the majesty and meaning of the trees He has created to point us to Him.

Science has demonstrated how important trees are in maintaining a healthy atmosphere and balanced environment. Even though environmentalism is so often associated with political controversy, it is important to remember that God is the first and ultimate environmentalist. We who are His children worship the Creator and not the creation; nevertheless, our love for God should compel us to love what He has made and to be good stewards of the earth He has entrusted to us.

In addition to great beauty, there is an aura of mystery in the midst of a beautiful forest. Living in Northern California, I have often ventured into groves of the giant redwood trees. You can stand in the midst of these giants and listen to the wind whispering in those trees. It is such a wonderful and powerful experience; you can almost believe you are listening, like Adam, for the sound of the Lord God walking in the cool of the day. Every now and again you hear the groan and crackle of the trees as they sway in the wind. C.S. Lewis captured this sense of mystery through his imaginative personification of trees in The Chronicles of Narnia. But the mystery of the trees is far more than mere stories or fairy tales. There is a mystery that plays into the real redemption story that God planted in His very Word.

Why do you suppose that God through Moses told us that“he who is hanged on a tree is accursed of God" (Deuteronomy 21:23c)? Well, whenever God curses something in the Bible, we ought to pay close attention. The apostle Paul unlocked the mystery behind this unusual Scripture in Galatians 3:13, by quoting it in the context of what our Lord Jesus accomplished:

"Christ has redeemed us from the curse of the law, having become a curse for us (for it is written, 'Cursed is everyone who hangs on a tree')."

Y'shua's death on Calvary's tree was foreordained by God, established as His plan to redeem us from before the very foundations of the earth. Like those trees in the Garden of Eden, that tree symbolized God's grace and provision, along with His warning of the consequence of sin and separation from Him. When Messiah hung on that cross, that tree, He experienced on our behalf all the pain that sin (and separation and brokenness) has unleashed on this world since the Garden. And when He died on that tree the veil was rent, the curse was broken and the blood of His life shed for us indeed became "the healing of the nations." The cursed One became the source of ultimate blessing. The mystery once hidden has now been revealed and we who believe are now redeemed. Hallelujah!

I don't know what kind of tree that cross on which Jesus died was made from, but I am kind of glad I don't know. What happened on that cross means everything to me, but it's not a symbol I would choose to wear — mostly because many whom I am called to reach would misunderstand it. Sadly, the symbolism of the cross has been misused throughout history, especially with regard to the Jewish people. And as Moishe Rosen often pointed out, Jesus didn't wear the cross; that cross wore Him.

But the wonder of the cross is forever wedded in my mind to the wonder of a tree. That is a symbol that I can see and celebrate each and every day with joy and gratitude. And it isn't a bad thing to have a special day set aside like Tu B'shevat, a day to celebrate God's gift of trees. How I long for those who are celebrating this day to understand and celebrate, not just the mystery and gift of trees, but also the mystery and gift of the One who died upon that very special tree to make possible the healing of all the nations.

After fire, what types of trees are best suited for Israel? - JTA

Why did God put the tree of knowledge of good and evil in the Garden of Eden? - GotQuestions.org

The Tree Of Life - Institute for Creation Research (Henry Morris)