The Global Islamist Revolt Is Here

In case you didn't notice, and few have, there is a global Islamist revolution under way.

The world's press doesn't see it.

The talking heads on cable TV don't see it.

It's a case of not noticing the forest for the trees.

With revolts going on in Egypt, Tunisia, Pakistan, Yemen, Lebanon and Jordan, most of them clearly orchestrated from Iran, it's easy to believe these are unrelated, disconnected uprisings.

But if you have been observing the Muslim world like I have been for 35 years, what's happening right now is as big a development – maybe bigger – than what happened in 1979 when backers of Ayatollah Ruhollah Khomeini, with a push from Jimmy Carter, overthrew Iran's Shah Mohamed Reza Pahlavi in one of the most tragic and unfortunate international developments of the late 20th century. We, in the West, have been paying the price for it ever since. 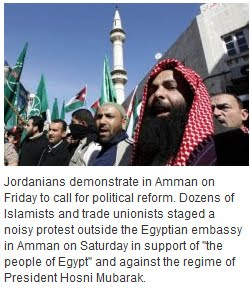 This is the work of the Muslim Brotherhood, with the aid and encouragement of Tehran. And the ripple effect of what we're seeing is hard to overstate.

As the leader of Jordan's powerful Muslim Brotherhood, Hammam Saeed, warned over the weekend, the unrest in Egypt will spread across the Mideast and Arabs will topple leaders allied with the United States.

I've done my part to alert the public to the insidious work of the Muslim Brotherhood, including right here in the U.S. But, again, most Americans don't get it. They've been hoodwinked by the media and government school system into believing there is no active conspiracy for a worldwide caliphate, and certainly no threat to the U.S. from what the brotherhood refers to as the Muslim Mafia.

An amazing book by the same name, "Muslim Mafia: Inside the Secret Underworld That's Conspiring to Islamize America," was published more than a year ago by WND Books with the intention of exposing the secret international cabal working on behalf of Saudi-style Shariah law right here in America. Again, the book, a work of daring and courage and enterprise got a collective yawn from the politically correct establishment news media.

Now, as Rev. Jeremiah Wright would say, the chickens are coming home to roost.

Hosni Mubarak is nothing but a dictator, it's true. But he is a dictator who is holding the line on Islamic radicalism. If his regime goes, it will be replaced by something similar to what we see in Iran today – a government run by zealous mullahs hell-bent on bringing about a worldwide Islamic revolution.

Egypt is the largest and arguably most important Arab country in the Middle East. For decades now it has been at relative peace with its neighbor, Israel. How long will that last if Mubarak is replaced with a Muslim Brotherhood leader? Keep in mind it was the Muslim Brotherhood that assassinated Mubarak's predecessor, Anwar Sadat, for making peace with Israel.

Meanwhile, the U.S. is still in the midst of a quagmire in Afghanistan, while still engaged in Iraq. It can ill afford an explosion of violence and revolution and instability through the Middle East and the Islamic world.

But that appears to be just what is coming.

The U.S. is also mired in deep recession. Try to imagine how that economic dislocation will be exacerbated by a disruption of the flow of Middle East oil, as happened in the 1970s.

Remember, the U.S. and Israel are the primary targets. Europe has already capitulated to Islam. Israel and the U.S. stand virtually alone, and the U.S. is in denial of the threat.

What you see happening around the Islamic world today is big. It's dangerous. It's explosive.

If you think America, which has arrogantly and ignorantly refused to develop its own energy sources, is somehow immune, you are in for a rude awakening.

Egypt crisis: country braced for 'march of a million' - Telegraph.co.uk