Now that the Senate has voted to repeal the 17-year-old ban against homosexuals serving openly in the U.S. military, a number of groups have issued warnings over the consequences of Saturday's decision.

Eight Republican senators joined with Democrats on Saturday to put an end to forcing homosexuals in the military to keep their sexual preference to themselves - a policy which became known as "don't ask don't tell." (Final roll call vote: 65-31)

A former Army chaplain who now recruits military chaplains says by repealing the ban, Congress has redefined morality, with uncertain consequences. Retired Brig. Gen. Doug Lee tells The Associated Press that chaplains from the churches he represents could be forced to choose between their career and their calling to teach and counsel what the Bible says about homosexuality. Lee notes that the Bible says, "Woe to those who call evil good, and good evil."

President Barack Obama is expected to sign the repeal into law this week, although changes to military policy probably won't take effect for several months. Under the bill, the president and his top military advisers must first certify that lifting the ban won't hurt military cohesion, recruitment or retention. Repeal would mean that, for the first time in U.S. history, homosexual men and women would be openly accepted by the armed forces and could acknowledge their sexual orientation without fear of being kicked out. 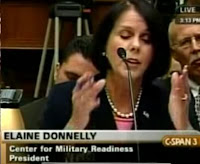 Elaine Donnelly of the Center for Military Readiness says history will note that the outgoing 111th Congress acted with needless haste allowing no time for substantive hearings to examine findings and controversial recommendations in the Pentagon's Comprehensive Review Working Group Report.

She says liberals in Congress knew that the report could not withstand informed scrutiny, so "Senator Susan Collins [R-Maine] persuaded others to join her in breaking their word on legislative priorities - a betrayal that belied previous statements calling for full and open debate."

In a statement released on Sunday, Donnelly outlined several issues in the Pentagon's Working Group report which now must be dealt with:

Meanwhile, the conservative legal group, Alliance Defense Fund, issued a statement after the vote saying" "The Senate's cave-in to pressure from activists to impose homosexual behavior on our military will place our troops' religious liberties in unprecedented jeopardy. Indeed, the first official casualty of this hurried vote may well be the religious freedom of chaplains and Service members." ADF litigation counsel Daniel Blomberg went on to say "no Americans, and especially not our troops, should be forced to abandon their religious beliefs."

ADF says it stands ready to defend Service members if they are ever unconstitutionally required to choose between "serving their country or obeying their God as a result of this damaging policy decision."