Fundamental transformation - where have Americans heard that phrase before? In 2008, candidate Obama promised to “fundamentally transform” America which has resulted in skyrocketing debt and sustained joblessness. We surely do not want that on a global scale!

Yet, that is exactly what U.N. Secretary General Ban Ki Moon called for on Tuesday in Cancun, Mexico, at the U.N. Framework Convention on Climate Change, Conference of the Parties 16:

“We need to fundamentally transform the global economy - based on low-carbon, clean energy resources.”

It is toxic to join the phrase “fundamentally transform” with the U.N.’s monotonous call for “low-carbon, clean energy resources.” The meaning is spelled out by the Climate Action Network, a coalition of 500+ nongovernmental radical environmental groups, that demand a ZERO carbon economy by 2050!

Can you imagine the world without fossil fuels to heat and cool our homes and businesses, to run our industries, and to transport people and goods? Undependable energy sources such as solar and wind cannot fill the gap, and radical environmentalists have contempt for nuclear power, even though it produces no carbon dioxide.

The International Panel on Climate Change’s call for reductions of 25-40% below 1990 levels by 2020 seems tempered by comparison, especially when President Obama committed last year to a 17% reduction below 2005 levels by 2020.

But let us not forget what economists and scientists said of the 1997 Kyoto Protocol’s call for a 7% reduction in greenhouse gases below 1990 levels - even 7% would devastate the American economy. All of these demands are based on a theory, not on proven science, that the globe is warming and that arrogant humans could cause the globe to warm.

It is doubtful that the new U.S. Senators will approve the radical environmental “cap & trade/tax” legislation, but we can expect President Obama to use executive orders and the bureaucracy at the Environmental Protection Agency to implement his radical agenda; he is already doing that. 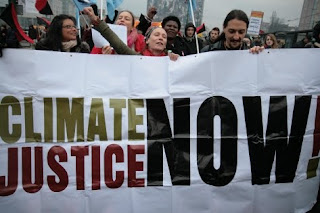 A call for compromise is rife among delegations in Cancun, but on Tuesday a “Declaration from the South-South [poor nations] Summit on Climate Justice and Finance” spelled out their impossible demands. They claimed that climate change is “an economic and social crisis, a political crisis, a food and energy crisis, and an ecological crisis.” They called for justice: “climate justice, ecological justice, economic justice, gender justice and historical justice [meaning that they are victims of climate change caused by rich nations].” They concluded their Marxist diatribe chanting, “Let’s globalize the struggle! Let’s globalize hope!”

Todd Stern, America’s head of delegation during this final week’s negotiations, said in a press conference on Tuesday that “an agreement is to be had” by the end of the week. May liberty prevail.