A Time to Shout

The new campaign calling for the release of Israeli agent Jonathan Pollard from prison in the US is in many ways a curious development. Pollard was arrested in 1985 and convicted on one count of transferring classified information to Israel during his service in US Naval Intelligence. He pleaded guilty to the charge in the framework of a plea bargain in which the US attorney pledged not to request a life sentence.

Despite this, Pollard was sentenced to life. So far, he has served 25 years, much of it in solitary confinement and in maximum security prisons. His health is poor. He has repeatedly expressed remorse for his crime.

Pollard's sentence and the treatment he has received are grossly disproportionate to the sentences and treatment meted out to agents of other friendly foreign governments caught stealing classified information in the US. Their average sentence is seven years in prison. They tend to serve their sentences in minimum or medium security prisons and are routinely released after four years.

The only offenders who have received similar sentences are Soviet spies Robert Hanssen and Aldrich Ames. While Pollard transferred documents to Israel over a period of 18 months, both Ames and Hanssen served the Soviets - the US's primary enemy - for decades. Their espionage led to the death of multiple US agents operating behind the Iron Curtain.

Pollard was given a life sentence because then secretary of defense Caspar Weinberger wrote a classified victim impact assessment to the sentencing judge in which he insinuated that he had transferred information to the Soviet Union as well as to Israel. Weinberger reportedly attributed the deaths of US agents to Pollard's activities.

Weinberger's accusations were proven false with the subsequent arrests of Hanssen and Ames. As it turned out, the damage Weinberger ascribed to Pollard was actually caused by their espionage.

Over the past five years, and with increased urgency over the past several months, several former senior US officials who had in depth knowledge of Pollard's activities have called for his immediate release. Former CIA director R. James Woolsey has stated that, contrary to Weinberger's allegations, none of the documents Pollard stole were transferred to the Soviets or any other country. A few months ago, former senator Dennis DeConcini, a past chairman of the Senate Select Intelligence Committee, sent a letter to President Barack Obama asking him to immediately release Pollard from prison. And in October, Lawrence Korb, who served as assistant secretary of defense under Weinberger, became one of the most outspoken champions for Pollard's release. Korb currently works for the Center for American Progress, which is closely allied with the Obama White House.

The renewed interest in Pollard's plight has garnered a great deal of attention in the local media as well. After Korb's initial call for Pollard's release in an op-ed published in The Los Angeles Times in October, Ma'ariv published a cover story in its weekend news supplement about Pollard's suffering. Reporter Ben Caspit demanded that Prime Minister Binyamin Netanyahu formally request that Obama commute Pollard's sentence and release him from prison.

Ma'ariv's article caused a spike in media coverage of Pollard in November. And this month, Pollard was back in the news when the government intervened to help his former wife Ann and her father make aliya after the consulate in New York discovered they were both ill and living in poverty. 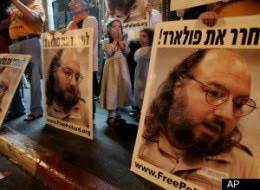 Public pressure on Netanyahu seems to be working. Before Monday, Netanyahu refused to make any public statements regarding Pollard. At his recent meeting with Obama, he refused to deliver a letter signed by 109 of the Knesset's 120 members formally requesting Pollard's release. On the other hand, heavy public pressure caused Netanyahu to initially agree to speak at Monday's rally for Pollard's release at the Knesset. Netanyahu canceled his appearance at the last moment however, and insisted on sufficing with a private meeting with Korb and Pollard's wife Esther. Obviously more pressure can and should be applied.

On the face of things, it seems that this is a particularly inauspicious time to renew the campaign to release Pollard. This is true first of all because of the nature of the current president who is the only one with the power to release him.

By now there is little question that Obama is the most hostile US leader Israel has faced. It is hard to imagine the circumstances in which he would agree to do something for Israel that his vastly more sympathetic predecessors George W. Bush and Bill Clinton refused to do.

In light of Obama's attitude, at first blush it makes more sense to try to advance Pollard's case through quiet diplomacy. This is the argument that cabinet secretary Zvi Hauser made in testimony before the Knesset earlier this month. Hauser appeared before the State Control Committee to respond to State Comptroller Micha Lindenstrauss' recommendation that Netanyahu set up a ministerial committee to oversee a public, formal campaign calling for Pollard's release.

But on second thought, the current campaign is eminently sensible. To understand why, we must consider the relative benefits of quiet, behind the scenes diplomacy and loud, public diplomacy.

Quiet diplomacy works well when all sides share a perception of joint interests and when its exposure is likely to change that perception. For instance, Israel and its Arab neighbors perceive a shared interest in blocking Iran from acquiring nuclear weapons. But given the nature of Arab politics, that perception, which enables the likes of Saudi Arabia, Egypt and Bahrain to work with Israel on preventing Iran from developing nuclear weapons, disappears the moment cooperation is made public.

Quiet diplomacy does not work when there is no perception of shared interests. For instance, regimes that repress human rights to maintain their grip on power have little interest in cooperating with free societies, when the latter demand that they free political dissidents from prison. Quiet diplomacy in the field of human rights between the US and the Soviet Union during the Cold War never succeeded, because the Soviets realized that opening up their tyranny to domestic criticism would destroy the system.

And today, as Cairo's fake parliamentary elections and Teheran's continued repression of democracy protesters shows, the Obama administration's quiet diplomacy with the Muslim world regarding human rights and democracy has utterly failed.

It is in cases like this where public, noisy diplomacy comes in handy. Public campaigns are helpful when one government wishes to persuade another to do something it doesn't want to do. Last week we received a reminder of the effectiveness of such behavior with the publication of protocols of meetings held by president Richard Nixon in the Oval Office.

One such meeting involved a conversation between Nixon and secretary of state Henry Kissinger following a meeting with prime minister Golda Meir. She had asked Nixon to support the Jackson-Vanek amendment that linked US economic assistance to the USSR to the latter's willingness to permit Jews to emigrate. Kissinger opposed the request, telling Nixon,

On the face of it, Kissinger was right. Using humanitarian considerations to weaken Soviet tyranny probably didn't help US arms control negotiators score points with Leonid Brezhnev. But on a deeper lever, he was completely wrong.

The Jackson-Vanek amendment not only forced the Soviets to permit limited emigration of Jews. It started a process of opening the Soviet system, which ended up destroying the regime just a decade later.

Since taking office, Obama has only used public diplomacy in the Middle East to convince one government to take action it believed was antithetical to its interests. Last year he waged a forceful, unrelenting public diplomacy campaign to convince Netanyahu to abrogate Jewish property rights in Judea and Samaria. And it worked.

Although it harmed the sacrosanct pillar of Zionism that Jewish rights are nonnegotiable, although it weakened Netanyahu's standing with his party and voters and although it empowered the Palestinians to expand their political war against Israel on the international stage, Netanyahu gave in. The public pressure Obama exerted on him compelled him to act against his interests.

The US is not an evil empire. And it is hard to see how a clear demand for Pollard's release on humanitarian grounds will have any fundamental impact on its nature.

And that is fine. But the fact is that Obama has no interest in freeing a suffering Israeli agent who was railroaded by Weinberger and remains in prison due to the efforts of Israel haters who wrongly insist he did untold damage to US national security. Indeed, many of Pollard's detractors are members of Obama's political camp.

Israel can't expect a lot of help on this from American Jews, although they stand to be major secondary beneficiaries if Pollard is released. The impact of his case on the US Jewish community has been debilitating. Although the US and Israel are strategic allies which share many of the same interests and fight the same enemies, Israel's detractors in the US foreign policy community use the Pollard case as an excuse for questioning the loyalty and patriotism of American Jews who serve in the US government and support Israel. His continued incarceration casts a long shadow over American Jewry.

The odds are poor that a public campaign to win Pollard's release will succeed. But if Israel is going to do anything at all, its actions should be concentrated in the public realm. As we have seen, quiet diplomacy, the strategy the Netanyahu government tried until now, will never get him out of jail.

And Israel must act. Pollard's unfair, unjustified and discriminatory sentence and treatment are a dismal symbol of Jewish vulnerability. His personal suffering is inhumane, real and unrelenting. He needs us to stand up for him.

And so we must. And so we will. The time has come, against all odds to shout that Pollard must be freed. Now.