Step aside stem-cell research. Step aside Dr. Connors and his use of lizard DNA to regrow human tissue (a Spiderman thing). A group of Canadian researchers have successfully produced red blood cells straight from adult skin cells. Not only did these scientists "trick" human skin cells into becoming blood cells, but no stem cells were harmed in the making of the experiment.

Stem cell research has long held hope for those suffering from major degenerative diseases. By infusing healthy stem cells into the pancreas of diabetics or the heart muscle of heart-attack victims or the brains of people with Parkinson's disease, researchers have hoped to replace degenerating tissue with healthy tissue that can grow and regenerate patients back to health.

Now, researchers have found a method to completely skip the stem cell stage through a process called "direct conversion" and turn one kind of adult cell into another. Stem-cell researchers at McMaster University in Hamilton, Canada, published their findings in the November 25, 2010 edition of Nature, describing their success in taking fibroblast cells from human skin and converting them into the progenitors for red blood cells.

Mickie Bhatia and his fellow researchers faced the same problem many researchers face when working with stem cells; the cells want to act like embryonic cells. "Those cells, because they think they're embryonic, make embryonic and fetal blood," Bhatia said. Adults do not need embryonic hemoglobin in their blood. They need grown-up hemoglobin. Bhatia and his team decided that they therefore needed to find a method of taking adult cells and converting them into the adult red blood cells they wanted. 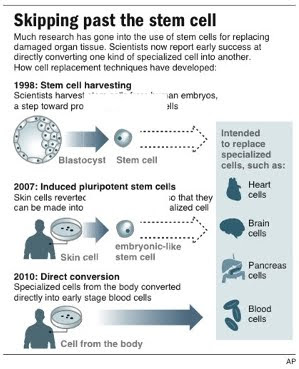 The researchers infected the fibroblast cells with a virus that inserts OCT4 gene into them. This would normally transform the fibroblasts into induced pluripotent stem cells (IPS) – cells able to turn into anything. However, after encouraging the cells to grow and reproduce in a cocktail of regulatory proteins, researchers found that the cells developed into blood progenitor cells without first turning into IPS intermediate cells. IPS cells tend to cause tumors, which means there's an advantage in avoiding IPS cells as the middle man. The team had success; the blood progenitor cells produced functioning white blood cells, red blood cells, and platelets – of the adult variety.

Direct conversion researcher John Gearhart of the University of Pennsylvania told the Associated Press, "This is something that's really caught fire because it's an easy strategy to use. Everyone's out there trying their different combinations (of chemical signals) to see if they can succeed."

Still, Gearhart cautioned the public to not get too excited too fast. The direct conversion technology is new and requires a great deal more research before it can be ready for testing on human patients. There are many unknowns regarding how these cells will actually act in the human body. We do not want to put red blood cells in a human being and find that those cells want to act like skin cells after all.

"We're a long way from showing safety and efficacy for any of these things," Gearhart said. "This stuff is all so new that we have a lot of work to do."

There is great hope that new techniques like this will provide the field of regenerative medicine with options that avoid the moral and ethical (and medical) problems associated with embryonic stem cell research. Dr. David Prentice, a former Indiana State University biology professor who is now a fellow at the Family Research Council said the success of the technique "exposes the failure of unethical, unsafe embryonic stem cell research, rather than the usual hype associated with embryo research. Direct conversion offers an ethical way forward, and may even be one mechanism by which adult stem cells are producing current successes in patients."