Israel went from having no winter to being pounded by the heaviest winter storm the region has experienced in over 20 years.

In just 24 hours, from Sunday morning to Monday morning, more than six feet of snow fell on the peak of Mount Hermon in northern Israel, and nearly four feet of snow blanketed the surrounding Golan Heights and other hills throughout the Galilee. Snow even fell briefly in Jerusalem, but did not stick to the ground.

Heavy rains and howling winds blasted the coastal plain and central mountains of Israel, with flooding being reporting in a number of areas. The ports in Tel Aviv and Caesarea sustained considerable damage. 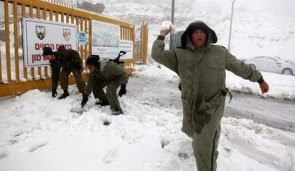 So, the long-awaited arrival of winter is a mixed bag for Israel. The flooding and high winds have caused widespread damage, and at least 30 people have been injured by falling objects. The recently scorched Mt. Carmel is also at risk of experiencing major mudslides.

At the same time, the Sea of Galilee rose a fair amount, and all the snow currently on the Hermon and the Golan will eventually melt and run down into the dwindling lake.

The storm was a much needed boost to a country in the midst of a severe drought, but it did come at a cost.