Hizbullah and the Information War

On January 15 the UN's Special Tribunal for Lebanon is scheduled to issue indictments against a number of Hizbullah operatives for the murder of former Lebanese prime minister Rafik Hariri in February 2005. All of Lebanon and much of the region is waiting in suspense that grows with each passing day.

The news that Hizbullah would be fingered by the prosecutors was first made public in July. Since then, Hizbullah chief Hassan Nasrallah has threatened repeatedly to set fire to Lebanon and perhaps Israel if Daniel Bellemare, the chief prosecutor dares to go forward. Given Hizbullah's track record of war, murder and intimidation, no one doubts that the Iranian-proxy force will keep its promise if it comes to that.

Almost immediately after Hizbullah was named as the central suspect in Hariri's assassination, Hizbullah's ally Syria began negotiating a deal with Saudi Arabia, which serves as the patron of Lebanon's Sunni community. The goal of these talks is to get Hizbullah off the hook, "in order to preserve stability."

Bellemare made clear this week that he will not be influenced by politics in dispatching his duties to the law. If he is true to his word, then Hizbullah members will certainly be indicted for assassinating Hariri next month.

What this means is that the most attractive option for Hizbullah and its allies right now is to discredit the tribunal. To this end, Hizbullah has repeatedly characterized the UN tribunal as an Israeli and American plot. Syria has insisted that the Lebanese who testified before the tribunal gave false testimony.

While these allegations may have convinced their supporters, both Syria and Hizbullah know that the only effective way to discredit the tribunal is to coerce Hariri's son, Prime Minister Saad Hariri to disavow the tribunal and withdraw Lebanese governmental support for its proceedings.

Although such a move would probably have little impact on the tribunal's ultimate judgment, it might reduce the political impact of the indictments for Hizbullah in Lebanon.

And so according to Ha'aretz, Syrian dictator Bashar Assad and Saudi King Abdullah reached a deal in which Hariri Jr. will disavow the tribunal. In exchange, Hizbullah will agree not to murder him.

Hizbullah has not surprisingly announced its support for the deal. Hariri has given a series of contradictory statements that lend to the sense that he is trying to run down the clock. This week he met with Abdullah in New York where the Saudi despot is undergoing medical treatment. On Wednesday he travelled to Saudi Arabia for further talks.

In the meantime, just to underline its willingness to make good on its threats, last week Hizbullah had its affiliated trade union, the National Union for Labor Syndicates stage a protest against the government. As Hanin Ghadar at the NOW Lebanon news portal noted, in the days leading up to the terror group's coup in May 2008, it had its labor affiliates stage similar protests.

And that brings us to the basic question of why is Hizbullah taking the tribunal so seriously?

What does it care if its members are indicted for murdering Hariri? This is a terror group that has always been perfectly willing to kill in order to get its way. And everyone knows it.

Hizbullah operatives killed Hariri because he was irritating Nasrallah and Assad with all his talk about Lebanese sovereignty. Then they killed parliamentarian after parliamentarian to deny Hariri Jr.'s parliamentary majority the power to form a government or do anything else without Hizbullah agreement. When even that was insufficient to force the government to slavishly do its bidding, Hizbullah carried out its bloody coup in May 2008 in order to take over effective control of the government and the Lebanese army.

So too, after the June 2009 elections, Hizbullah coerced members of Hariri's coalition to change sides and so prevented him from forming a coalition without Hizbullah receiving veto power over all government decisions.

And even if Hizbullah did care about what its fellow Lebanese think of it, the fact is that Hizbullah is not an independent actor. It is an Iranian proxy. And the Iranians have made clear that they do not care what the tribunal does. Iran's supreme dictator Ali Khamenei announced earlier this month that as far as Iran is concerned, the tribunal's judgments are null and void. In his words, "This court is a kangaroo court and every verdict it issues is rejected."

So again, why is Hizbullah so concerned about this tribunal?

Hizbullah is concerned because Hizbullah understands the power of symbols. No, its operatives will probably never be jailed for their crimes. But the tribunal is a symbol. If Bellmare dares to defy Hizbullah, then others might consider doing so.

On the other hand if Hizbullah is able to coerce Hariri to withdraw the Lebanese government's support for the tribunal and disavow its work, it will have demonstrated its strength and authority in a way that will deter others from challenging it.

Information warfare is not simply a question of competing narratives, as it is often characterized in the West. Information war is a form of warfare whose aim is to use words, symbols and images to force people to take real action. These actions can involve everything from war to terrorism to surrender.

In closed societies, information warfare is used to cause people to rally around the side of the group conducting the information operation and to mobilize supporters to act against the chosen enemy. For instance, when its leadership is interested in inspiring terror attacks against Israel, the Palestinian Authority broadcasts around the clock incitement against Israel.

On May 8, 2001 a group of Palestinians from a village adjacent to the Israeli community of Tekoa in Gush Etzion got their hands on two Jewish children Koby Mandell and Yosef Ishran from Tekoa. The two boys were bludgeoned to death with stones. The details of the butchery are unspeakable.

The question is what can make human beings butcher children? How can a person hurt a child the way that their killers hurt them?

The answer is Palestinian television.

In the weeks before the murder, PATV (funded by foreign donors) broadcast doctored footage around the clock of what they claimed were atrocities carried out by Israel. They showed doctored images of mutilated corpses and claimed that Israel had mutilated and abused them. Israel and Jews were so demonized by these false images that after awhile, the Palestinians watching these shows believed that Jews, including Jewish children, were all monsters who must be destroyed and made to pay for their imaginary crimes.

This was an act of information warfare that in the event, led Palestinians to butcher Koby Mandell and Yosef Ishran.

As for information warfare aimed at Westerners, here too, the Palestinian Authority, like Hizbullah has a long track record of success. Journalists know that the PA has no compunction about kidnapping, arresting and beating up reporters. They do it to Palestinian reporters routinely. With their sure knowledge, Western reporters who come into the PA recognize that if they want to be safe, they have to report stories that will make the PA happy. 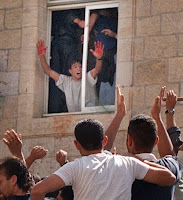 Among other things, Cristiani wrote, "We [RAI] emphasize to all of you that the events did not happen this way, because we always respect (will continue to respect) the journalistic procedures with the Palestinian Authority for (journalistic) work in Palestine and we are credible in our precise work."

Fearing Palestinian revenge attacks, Mediaset was forced to shut down its offices.

This week, Swedish and Danish police announced the arrest of four Muslim terrorists who were en route to carrying out a massacre at the Jyllands Posten newspaper. The attack was supposed to avenge the newspaper's publication of cartoons of Muhammed in 2005.

A US diplomatic cable leaked by WikiLeaks and published Monday by Sweden's Aftonbladet newspaper reported that Syria's Assad himself directed the information operation in 2006 that led to rioting against Denmark and Jyllands Posten throughout the Muslim world in 2006. Assad reportedly ordered Syria's Grand Mufti to incite his fellow imams to attack Denmark for publishing the pictures.

The Arab world's response to WikiLeaks shows just how powerful the incitement against Israel and Jews on the Arab psyche is. According to Hazem Saghiyah from the NOW Lebanon news portal, the Arab world was beset by confusion by the leaked US cables because Israel was not exposed as demonic.

As Saghiyeh put it, for Arabs who have come to believe that Israel controls the world through its satanic power, "these documents should have provided the decisive argument" against Israel.

The fact that it is the Arab leadership, rather than Israel that has been exposed as lying and two-faced, makes the Arab world writ large view the WikiLeaks operation as a huge Zionist conspiracy.

What all of this shows is that information wars are not just about getting out the facts. Like kinetic warfare, they involve power plays, intimidation and the use of subconscious and visceral manipulation.

Israel has recently awoken to one aspect of information warfare. It has recognized the consequences of years of demonization of Israel in Europe and international organizations. But Israel has yet to awaken to the fact that it is a type of warfare and has to be countered with counter-information warfare.

Obviously this doesn't mean that Israel should begin acting like its enemies. But what it does mean is that Israel must begin using more hard-knuckle techniques to defend itself. It must begin targeting people's emotions as well has their minds.

For instance, when Israel is confronted by threats of lawsuits for acts of self-defense, it responds with defense attorneys. When the US was threatened with lawfare by Belgian courts, then secretary of defense Donald Rumsfeld responded by threatening to remove NATO headquarters from Belgium.

When Israel is accused of targeting Palestinian civilians, it responds by attaching legal advisors to combat units. What it should be doing instead is providing film footage of Palestinian children being trained as terrorists and exploited as human shields.

War is a dirty business. Information warfare is a dirty form of war. And if we don't want to lose, we'd better start fighting.

Lebanon is staring into the abyss - The Guardian