Dawn of a Surveillance Society

I am very alarmed by a trend I see taking place in America. Hardly a day goes by when I don't read of some new plan by the government to take greater control of our lives.

A few weeks back, I reported on the Transportation Security Administration's new rules that require the flying public to either pass through body-scanning machines that show a naked image of themselves to a TSA agent or endure a physical pat-down that would qualify as sexual groping. I must live in a nation of exhibitionists, because it appears that people are willing to tolerate this massive invasion of personal privacy.

Thomas Jefferson is credited for coining the motto, "The best government is that which governs least." He said this because he knew what would happen if there were no check of the power of government: Instead of the government being here to serve us, we would be here to serve it.

Here are just a few examples of the power grabs that have made headlines just this year:

The branch of government that has me the most concerned is the Department of Homeland Security (DHS). It was created as a direct result of the 9/11 attacks. Rather than focusing on protecting our borders, this agency has developed a severe case of mission creep. 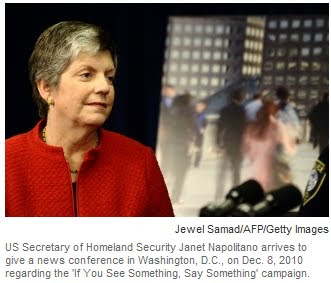 I found it spooky to read that the DHS head, Janet Napolitano, is hooking up with Wal-Mart. She is bringing the agency's "If You See Something, Say Something" campaign to hundreds of Wal-Mart stores across the country. In a video message, the secretary asks Wal-Mart shoppers to contact local law enforcement if they see suspicious activity. What we have here is the genesis of what has been the bedrock of most communist governments – neighbor spying on neighbor.

The DHS seems to be following the same path that led to the rise of Adolf Hitler's SS. The original purpose of the SS was to act solely as Hitler's personal bodyguards. From its small beginnings, this outfit grew into a monstrosity. By the end of World War II, the SS had over a million members, and it was responsible for three-fourths of the war crimes committed by the Nazis.

I'm wondering where all the conspiracy folks who were in such great abundance in the 1980s and 1990s are now. These encroachments on our freedom should be their bread and butter. I went to look at the site of a gentleman who was very active a decade ago in warning against Big Brother, and to my surprise, I found his domain to be in a state of neglect. The watchmen seem to have abandoned their post, so the devil is allowed to operate freely.

I'm still mystified over how all these new rules can flourish without a major crisis as a catalyst. As this stuff is going on, I’m asking myself, "Didn’t the Republicans just win back the House?" It chills me to think what would happen if we suffered a major economic collapse - an event that could occur at any moment.

We know from Bible prophecy that much of the world will come under dictatorial rule. It is my prayer that the U.S. be the last to see freedom overrun. Unless we as Christians are willing to stand against the tide of government intrusion, we will find ourselves living in a nation we don't recognize.

TSA Gets Up Close and Personal - The New American

'See something, say something' campaign expanded to federal buildings - SecurityInfoWatch.com