The U.S. Border Patrol has captured thousands of people they say are classified as OTM which stands for "other than Mexican." Documents show many of them are from terrorists nations like Iraq, Iran, Afghanistan, Sudan, Somalia, Pakistan and Yemen. Federal authorities call those groups SIAs, which stands for "special interest aliens".

Federal officials have offered few details about the number of actual terrorists caught along the border.

Retired immigration agent Michael Cutler says the actual threat is being covered up.

"Incredibly the government is attempting to keep the citizens like a bunch of mushrooms. Keep us in the dark and feed us a bunch of manure." 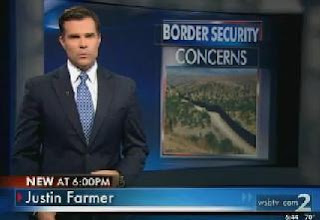 Government officials have denied that terrorists have crossed our open border. Still, Channel 2 Action News has proof they have. Channel 2 Anchor Justin Farmer found documents filed in federal court in San Antonio, Texas, in May. They show an indictment against Ahmed Muhammad Dhakane for allegedly smuggling hundreds of people from Brazil to Mexico, then into the U.S. The federal indictment states it includes some Somalis from the terrorist group Al Shabob. Terrorism experts say the group is responsible for terrorist attacks and suicide bombings worldwide.

"To this day we do not know where those 300 Somalis are," said Rep. Michael McCaul of Texas. "We do know they are in the United States."

A 2009 Government Accounting Office report confirmed agents have picked up three known terrorists who crossed the southwestern border of the United States. No other information was released.

"There are many people not only being apprehended, but slipping through the cracks on our southern flank that are very dangerous," said McCaul.

Intelligence officials have admitted on record there is a terrorism threat. In 2007, former National Intelligence Director Mike McConnell told the El Paso Times that terrorists have been crossing the border. He said there are many situations where people are alive today because the terrorists were caught.

Sheriffs along the southwestern U.S. border also are aware of the threat.

"There is (intelligence) we have that is very troubling", said Sheriff Paul Babeu of Pinal County, Ariz. "Things are not getting better, they are getting worse."