What the Palestinians Buy with American Money

Two weeks ago, a Palestinian from Bethlehem was arrested by the US-financed and trained Palestinian Authority security forces. He was charged with "carrying out commercial transactions with residents of a hostile state."

No, he was not buying uranium from Iran. His purported crime was purchasing wood products from an Israeli community located beyond the 1949 armistice lines.

Denied bail by the US-funded PA magistrate's court in Bethlehem, he has been remanded to custody pending the conclusion of his trial.

This man's arrest is part of what the unelected, US-supported Palestinian Prime Minister Salam Fayyad has touted as his "National Honor Fund." The goal of this project is to ban all economic contact between Palestinians and Jews who live and work beyond the 1949 armistice lines. As far as the supposedly moderate Fayyad is concerned, those Jews and Israel generally comprise the "hostile state," that the Palestinians under Fayyad's leadership are being compelled to boycott.

Speaking to The Jerusalem Post, Palestinian Labor Minister Ahmed Majdalani said the PA hopes that by the end of the year all the thousands of Palestinians who are employed in Israeli communities in Judea and Samaria will quit their jobs. What he didn't mention is that if they don't quit, they will be arrested.

According to PA Economics Minister Hassan Abu Libdeh, since the start of Fayyad's campaign, the PA has confiscated $1 million worth of Israeli products including foods, cosmetics and hardware from Palestinian stores.

Fayyad's measures come on top of previously enacted PA measures like imposing the death penalty on Palestinians who sell land to Jews. Less than two months ago, the PA reaffirmed that it will continue to execute any Palestinian who commits this "crime."

There is no way to credibly claim that these actions advance either the cause of peaceful coexistence or Palestinian economic prosperity. Yet it is precisely in the hope of advancing these goals that the US government funds the PA.

Despite his campaign to boycott Israel and punish Palestinians with economic ties to the Jewish state, Fayyad is the US's favorite Palestinian. Since PA President Mahmoud Abbas appointed Fayyad to lead the rump Fatah government in Judea and Samaria after Hamas took over the Gaza Strip, US aid to the PA has increased by more than 700 percent. Most of this aid has gone to propping up Fayyad.

The US directly finances his budget. It funds and trains a Palestinian military. And it subsidizes his programs to build governmental institutions that loyally carry out his anti-Israel policies. 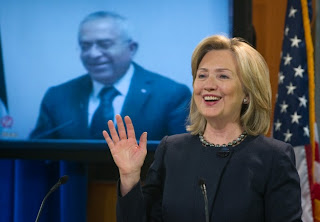 Last Wednesday, during a joint press conference with Fayyad, Secretary of State Hillary Clinton announced the US will give the PA an additional $150 million in aid to supplement the $400 million in financial assistance that President Barack Obama pledged in June. This supplement comes in response to Fayyad's claim that he needs $500 million to close his budget shortfall.

According to the Congressional Research Service, the PA is the largest recipient of foreign assistance in the world. According to Bloomberg, it received $1.2 billion in 2009 and will receive $1.8 billion by the end of the year.

The US provided the PA with $500.9 million in 2009 and, before Clinton's announcement, was scheduled to provide it with $550 million in 2011. This assistance does not include US financial support for UNRWA, an agency devoted exclusively to providing welfare benefits to Palestinians while subordinating itself to a Palestinian political agenda. The US is the single largest donor to UNRWA. Last year the $268 million US taxpayers gave the UN agency constituted 27 percent of UNRWA's budget.

Congresswoman Ileana Ros-Lehtinen, who is expected to become the chairwoman of the House Foreign Relations Committee in the next Congress, responded negatively to Clinton's announced expansion of US aid to the PA. In a statement released by her office last Thursday, Ros-Lehtinen derided the assistance as a "bailout."

"It is deeply disturbing that the administration is continuing to bail out the Palestinian leadership when they continue to fail to meet their commitments, under international agreements and requirements outlined in US law, including dismantling the Palestinian terrorist infrastructure, combating corruption, stopping anti-Israel and anti-Semitic incitement and recognizing Israel's right to exist as a Jewish state."

Ros-Lehtinen authored the Palestinian Anti-Terrorism Act of 2006, which conditioned US assistance to the PA on, among other things, "publicly acknowledge[ing] the Jewish state of Israel's right to exist."

While on the mark, Ros-Lehtinen's statement only scratches the surface of how contrary to US law and the goals of Palestinian economic development and peace US financial assistance to the Palestinians truly is.

Take US security assistance to the Palestinians. The US responded to the Hamas takeover in Gaza by massively increasing its military assistance to Fatah. According to the CRS, between 2007 and August 2010, US assistance to the PA security services totaled $400 million. They received $100 million in 2010 and are set to receive $150 million in 2011. This assistance has paid for the training and outfitting of 400 Presidential Guards and 2,700 soldiers in the National Security Forces. The US plans to train five additional 500-man NSF battalions.

The CRS report acknowledged these forces have improved the law and order situation in Judea and Samaria. But it also asserted that "uncertainty remains over the durability of these improvements and their connection with broader Palestinian economic and civil society development and with progress on Israeli-Palestinian negotiations as well as over the willingness and ability of the forces to incapacitate militants."

Indeed, there is little reason to believe that these US-trained forces will not join forces with Hamas and turn their guns on Israel in the future. Since 1996, PA security services have taken a leading role in the terror war against Israel.

Concerned about the threat these forces pose, particularly in light of Fayyad's rejection of Israel's right to exist, earlier this year OC Central Command Maj.-Gen. Avi Mizrahi warned that these US-trained forces constitute a qualitative jump in the Palestinians' war fighting capabilities against Israel.

"This is a well trained force, better equipped than its predecessors and trained by the US. The significance of this is that at the start of a new battle [with the Palestinians] the price that we will pay will be higher. A force like this one can shut down a built-up area with four snipers. This is deadly. These aren't the fighters we faced in Jenin [in 2002]. This is an infantry force that will be fighting us and we need to take this into account. They have offensive capabilities and we aren't expecting them to give up."

First, it is far from clear that the PA needs this assistance. According to the International Monetary Fund and the Palestinian Central Bureau of Statistics, in 2009 real GDP in Judea and Samaria and the Gaza Strip grew by 6.8 percent, (8.5% in Judea and Samaria). The report also claimed that unemployment declined. So if things are going so well, why is it necessary for foreign donor countries to increase their direct assistance to Fayyad's budget?

Second, given Fayyad's rejection of free trade principles, particularly as they relate to Israel, the PA's largest trading partner, it is hard to see how his economic leadership is credible. As the failed stimulus packages in the US have shown clearly, government bureaucracies do not create jobs. That is the work of the private sector. And yet, Fayyad is barring Palestinians from having trade ties with their most important business partners and commercial market. This is not the behavior of a leader who is interested in facilitating sustainable economic growth.

Finally, the simple truth is that it is impossible to prevent US budgetary assistance to the PA from financing Hamas, in contravention of US law. Each month Fayyad transfers funds to Hamas-controlled Gaza to pay the salaries of PA employees there. Fayyad has argued that this assistance cannot be considered material aid to Hamas, since the employees are employed by the PA. But this is nonsense.

These employees serve at the pleasure of Hamas. Paying their salaries contravenes US law as well as international law, which prohibits states from providing any assistance whatsoever to areas controlled by terrorists. This is true even if the actual money he transfers to Gaza comes from other income sources. Without the direct US budgetary assistance, he wouldn't be able to funnel money to Gaza.

Providing direct budgetary assistance to Fayyad isn't the only way the US finances Hamas. It also contributes to Hamas by funding UNRWA. US assistance to UNRWA has doubled in the last four years, largely as a way of avoiding providing direct aid to Hamas. Yet the CRS report notes,

"In Gaza, most observers acknowledge that the role of UNRWA in providing basic services (i.e., food, health care, education) takes much of the governing burden off Hamas."

In defending its assistance to UNRWA, the State Department told Congress that the aid "directly contributes to the US strategic interest of meeting the humanitarian needs of the Palestinians, while promoting their self-sufficiency. UNRWA plays a stabilizing role in the Middle East through its assistance programs, serving as an important counterweight to extremists."

But the fact of the matter is that UNRWA employees are Hamas members and sympathizers. And despite the State Department's claim that it has adopted safeguards to ensure that US assistance is not transferred to individuals and groups with links to Hamas and other terror groups, UNRWA's checks against terrorism are restricted to checking a UN list of banned terror groups that includes only al-Qaida and the Taliban. As the CRS report noted, UNRWA's terror screening list "does not include Hamas, Hizbullah or most other militant groups that operate in UNRWA's surroundings." In other words, UNRWA continues to employ terrorists, and its current procedures do nothing to prevent that.

A Framework of Cooperation agreement signed this year between UNRWA and the US sets out 15 steps for UNRWA to expand its terror screening. But the agreement is nonbinding. Moreover, its provisions in no way block terror-linked individuals or groups from receiving aid from UNRWA.

In truth, given the PA's refusal to recognize Israel's right to exist or take sustained, decisive action against terrorism, there is really no way for the US to continue funding it without breaking its own laws. But acknowledging this state of affairs would involve admitting that the peace process is a lie and that any Palestinian state that is formed today will be a terrorist state at war with Israel.

The incoming Congress might want to consider these basic truths before it approves further aid to Fayyad and his moderate government.

U.S. will give Palestinians extra $150 million in aid - The Washington Times

Palestinian Economy Is Booming, Thanks to Foreign Aid - The Media Line