The Prophetic Christian Role in Our New Government

There is going to be a lot of spin put on the overwhelming victories by Republicans in the November elections. One thing for certain: this is a historic rejection of the leftist Democratic socialist agenda. Unfortunately, it may be too late for America. She has been gutted by the uncontrolled spending of the menagerie of communists, socialists, anarchists, and Mohammedists that sought to destroy this country. Economically, our nation is depleted. The dollar is in decline and the current Administration has all but surrendered the nation and its exceptionalism to China, the International Monetary Fund and the United Nations without so much as a protest.

When all the smoke clears from this election, Republicans are being handed a dying fish whose oder has been ripening since George W. Bush's first round of government bailouts and the current president's exponential one-up-man-ship. The first order of business for the American people was to throw out as many of these scoundrels as possible with a clear message: We want our country back. We reject socialism. We reject multinationalism. We reject Islamic colonization. We reject the same sex marriage agenda. We reject the emasculation of our Constitution. Even though the message is loud and clear, certain Americans let politicians remain in office who created the mess - Reid, Pelosi, Frank - to name a few. 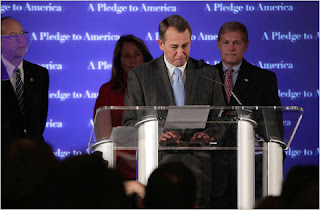 The question going forward is: Will this new crop of politicians have the intestinal fortitude to root out, reverse, or destroy every possible remaining smear on our national interest of this 2008 socialist coup, or are they window dressing for the one world agenda? My guess is that the American people cannot afford a sigh of relief and leave it up to the Republicans to do the right thing. They likely will not without tremendous pressure from the electorate. Already, establishment Republican John Boehner of Ohio is seeking to get his "common ground" grip around the Speaker's podium. The American people do not want the Republicans working with Democrats, they want a reversal of the Democratic agenda.

This is no time for compromise. We must find creative ways to undo what has been done to toss our nation into the heap of the third world by these ungodly traitors that have been running our government. Food and energy prices are going to rise sharply. We will be thrown into an economic position such as has not been experienced for generations. But we are Americans. And Christians must play a major role.

"Let your light so shine before men, that they may see your good works, and glorify your Father which is in heaven."

We must step into our prophetic destiny as salt and light. Let your light shine. Be salt of the earth by holding these rulers accountable. Stand fast.

Morning Bell: Get to Work - Heritage.org

Politics - According to the Bible: A Comprehensive Resource for Understanding Modern Political Issues in Light of Scripture - Wayne A. Grudem (Book)