A grand NATO to-do took place in Lisbon, Portugal over the weekend, and the member nations agreed to a couple of major items. First, NATO will withdraw from Afghanistan starting in early 2011 and slowly hand over all control of the fight there to the Afghani government. Second, a missile defense shield will be built in Europe after all – with the assistance of Russia. Whether or not there is a specific enemy bloc to align against, the allies are preparing to defend one another.

The second day of the summit was dedicated to Afghanistan. Twenty-eight countries are represented in the NATO-led force in Afghanistan, and all 28 signed an agreement with Afghanistan's President Hamid Karzai to hand over control of the war to his government starting in early 2011. Afghanistan is scheduled to be NATO-free by the end of 2014.

The NATO member nations have also finally agreed to build a missile defense shield in Europe. In the past, Russia has loudly protested the building of a missile defense system like this. Since Russia is now involved in its development, however, the massive defense program can go forward.

There are several prongs to the European missile defense shield, to which America will contribute a great deal. The US will provide Aegis ships capable of ballistic missile defense and will build land-based SM-3 interceptor sites in Romania and Poland. Detection systems complete with the best technology in sensing and shooting down missiles will be distributed in a variety of places to keep the shield flexible and able to protect the entire continent. The system will allegedly be capable of protecting all European allies, not just the few major countries. As Article 5 of the Washington Treaty makes clear, NATO is like the Three Musketeers – all for one and one for all. When it's convenient, at least. 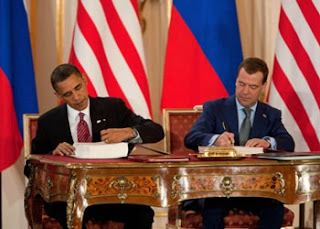 The Obama Administration has worked diligently to "reset" US relations with Russia, and this weekend was no different. The US and Russia agreed to join together in joint missile defense exercises and to cooperate on a ballistic missile threat assessment. The New START (Strategic Arms Reduction Treaty) has been sent to the Senate to ratify since the first START treaty expired last December. If ratified, the US would massively reduce its nuclear weapons stockpiles. US Vice President Joe Biden wrote an article in The Wall Street Journal to sell the treaty, arguing that it is vital in the effort to "reset" relations with Russia and to improve "global security."

Beril Dedeoglu of Today's Zaman asks why only Russia and the United States are planning to reduce their arms. Why not France or the UK?

"The purpose of NATO’s missile shield is to destroy missiles equipped with nuclear or conventional warheads before they reach NATO member countries’ territories. In other words, if one targets, let’s say, France, the missile will be eliminated without France [sic] needing to respond. One wonders why there isn’t any nuclear disarmament initiative in Europe while the US and Russia are busy implementing the new Strategic Arms Reduction Treaty (START)."

Why not reduce arms throughout Europe? Ah. Because the leaders of France and the UK may recognize something that globalists always seem to forget in their conviction that global unity means global peace. They forget that the best laid plans of mice and men often gang agley ("go awry"), as Robert Burns so aptly wrote. If the missile defense system doesn't work after all, France and the UK do not want to be caught flat footed. If the enemy infiltrates the missile defense system, or if a rogue NATO member country decides to attack, or if the leaders of NATO themselves become dangerous tyrants, the UK and France will both have a little backup protection. The US has far more nuclear weapons than any other country in the world. If the Senate ratifies the treaty, the US is still not getting rid of all its weapons. It will simply reduce its number to something closer to what the rest of the world has, (and will lose some of its defensively-useful brow-beating power in the process).

The Lisbon Summit appears to have produced results that could bring greater peace to Europe and the world. In the end, however, the world is a highly unpredictable place, and the enemy of world peace is not a simple thing to nail down. It is good to increase cooperation and understanding, but putting faith in world governments to bring true peace has always led to disappointment. It is only by the Prince of Peace that true global peace will ever reign.

In the meanwhile, let's not stop praying for those making these major decisions. As Paul instructed Timothy in 1 Tim 2:1-4:

"I exhort therefore, that, first of all, supplications, prayers, intercessions, and giving of thanks, be made for all men; For kings, and for all that are in authority; that we may lead a quiet and peaceable life in all godliness and honesty. For this is good and acceptable in the sight of God our Saviour; Who will have all men to be saved, and to come unto the knowledge of the truth. "

Top 10 Reasons Why New START Is A Non-Starter - Heritage.org

Troops Spend Thanksgiving Away from Home - Department of Defense