Will the United Kingdom leave the European Union?

This question was brought to my attention by evangelist and friend Kenneth Humphries of Treasured Truth Today Ministries, based in Northern Ireland. For those of us across the pond, that's the Ireland that's part of the United Kingdom, and not the Ireland that's tied to the European Union by currency. Ken's Ireland is not the one that is about to get bailed out in billions of Euros by the European Central Bank in Frankfurt as the second nation after Greece but before Portugal and Spain, all looking to stem off economic collapse due to their overspending on social programs. As EU nations economically tumble one upon the other like dominoes, it is no wonder that the United Kingdom is rejoicing over not having adopted the EU's currency — the Euro, but fearful of their card carrying membership.

The stated first call for Britain to withdraw the United Kingdom from the European Union has come from the newspaper The Daily Express. In their article/petition "Get Us Out of Europe", the paper has made an interesting case as to why the European Union seems on the brink of failure, and why the British should not want any part of it. They are in a struggle, as they put it, to "repatriate British sovereignty from a political project that has comprehensively failed people right across Europe."

The United Kingdom, The Daily Express claims, was forced into the Treaty of Lisbon because of a lack of public referendum given to its people so they could vote on whether to join or not.

This treaty once ratified created the constitutional basis for an economic and political government that united its 27 member states into one superpower — the European Union. The Lisbon Treaty became effective only one year ago on December 1, 2009. It also set up and empowered the offices of a long-term President of the European Council and a High Representative of the Union for Foreign Affairs and Security Policy, two positions many students of Bible prophecy are quite wary of as possibly predecessory positions the Antichrist and False Prophet could one day hold.

Results of a Europe United

The first and inevitable result of the creation of the European Union, the paper charges, has forced the United Kingdom to take on an extraordinary amount of the required contributions into the EU, all of which to fund "power grab[s]" and "bloated budgets." With the Great Recession keeping unemployment in the EU at 10%, the progressive leadership in the Union's capital at Brussels has responded in typical liberally-minded fashion by expanding social programs at an accelerated rate which instead only create "new job-destroying regulations and conspire to turn the whole EU into a zone of high taxation." 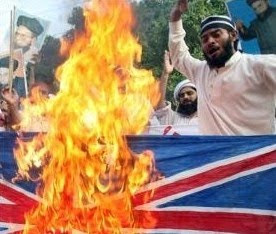 The second result for the member states within the European Union is a liberal view of immigration, allowing a free flow of migrants entering not only from within member states but also from outside of the EU. The largest group entering are Islamic immigrants from Africa, a terrifying security threat to many who see the acceptance of sharia law within the UK's legal system as a sign of the end of the British form of justice.

The third result of membership within the EU, The Daily Express explains, is the European Court of Human Rights — a pan-European tribunal — now superseding British law, "preventing the deportation of terror suspects and demanding that convicted prisoners are given the vote." Any member state's laws can now be trumped by overarching European Union jurisdiction.

The fourth result, evident to all except those who hold a liberal elitist, globalist view, is the destruction of the economies within many of the EU's member states. As The Daily Express decries, "the past two decades of European integration have turned mainland Europe's economies from some of the world's industrial powerhouses into also-rans, stuck in the global slow lane." As sovereign nations turned over their currencies to become subservient states, only Germany has reaped the benefit of the united currency by "locking its neighbours into exchange rates they are unable to compete at." Unfortunately for their success, the failing nations have looked to Germany to fund the bailouts, bringing even the most successful EU nations towards economic disaster.

The Daily Express is campaigning for a "Britain is Better Off Out," a United Kingdom totally removed from the European Union. They say that it is Europe that is in decline and Britain that is being held back, and "it is time to break free" beginning by signing their petition. The benefits of breaking free, the paper purports, will enable the UK to be "able to import from and export to the EU freely without being subjected to its federalist ambitions." Not only would the UK be able to trade freely with the EU, but they could open new trading with the rest of the world without Union restrictions. In other words, there are those in the UK who believe a free market and not socialistic economics would create wealth.

The formation of the European Union is a worthwhile attempt to unite Europe after two bloody world wars so as to propagate peace and avoid such horrors from happening again in the future. Uniting their fortunes together, even under the recession, has made the EU an economic powerhouse, rivaling the financial might of the United States and China. Should NATO be dissolved (something the US should highly consider as it pays nearly 50% of its funding) and the EU form its own military, the combining of 27 armies will become a terrible force to be reckoned with. Such a force of "good" in the wrong hands would naturally become a terrifying force for evil, and that is the European Union's inevitable destiny.

Finances, land, power, and military might, yet weak and brittle, always appearing as if it might dissolve, the European Union this day is a sure description of the final form of the Roman Empire Daniel describes in Daniel 2:41-43.

Great Britain's grassroots does not want to "mix" and cries out for independence from the juggernaut they've joined, but in this era marked by insane leaps and bounds towards having the world fall under one government, their attempts will fail. Their attempts to withdrawal will be as weak as the states within the United States trying to reclaim their authorities under the 10th Amendment against those of the federal government. Neither will be successful against the globalist tide. Should the UK gain some modicum of freedom, the inevitable world leader the Bible predicts who will rise from the Revived Roman Empire will crush it (Dan. 9:26), most likely when he subdues three of the kings from the very Union he rises from (Dan. 7:24).

In the end, no nation will break free from the black current of globalism that will engulf first Europe then all the nations of the world. But, the Rock cut not by human hands — Jesus the Messiah — will return to "crush all those kingdoms and bring them to an end, but it will itself endure forever," setting up the kingdom of God "that will never be destroyed, nor will it be left to another people" (Dan. 2:44-45).