Are These Signs of the Times?

Awhile back, I was in a restaurant in Arkansas. As my friends and I talked with the server and invited him to the event where I would be speaking that night, he asked me, "Do you think we are living in the last days? Do you think that Jesus Christ will come back in my lifetime?"

With all that is happening in our world today, a lot of people are asking that question. Looking at the recent earthquakes and tsunamis, the aggression of North Korea, the new nuclear capabilities that are being developed by Iran and the continuing threat of global terrorism can cause even the doubters to wonder whether these are the end times the Bible speaks of. Are we living in the last days? Is the end of the world near? Is Jesus Christ coming back again?

There is no bigger event that will ever take place in the world than the second coming of Jesus Christ. And it will happen. It is not a matter of if, but when. I am not the only one who believes it. A Gallup poll revealed that 66 percent of Americans believe that Jesus Christ is coming back to this earth in the future. That is at least 25 percent more Americans than those who claim to be born-again Christians. So it is not only Christians who necessarily believe it. A lot of people are beginning to sit up and take notice, and they believe Christ is coming back again.

When Jesus was asked what the sign of his return would be, he painted a picture of a world torn by strife and war, a world rocked by great earthquakes and ravaged by pestilence, and a world where there would be famine in the midst of plenty. He said,

"There will be signs in the sun, moon and stars. On the earth, nations will be in anguish and perplexity at the roaring and tossing of the sea. Men will faint from terror, apprehensive of what is coming on the world, for the heavenly bodies will be shaken" (Luke 21:25 NIV).

The catastrophic tsunami of Dec. 26, 2004, was caused by the fourth most powerful undersea earthquake on record, an earthquake so forceful that it moved the entire island of Sumatra 100 feet to the southwest from its pre-quake position. Geologists said it literally sent the entire planet vibrating and actually interfered with the Earth's rotation to the degree that time stopped for three milliseconds.

According to the U.S. Geological Survey, earthquakes are increasing. Every decade for the past five decades has increased the number of earthquakes – not just minor ones, but what are now called "killer quakes." It seems as though every catastrophic earthquake that occurs is said to be the strongest ever. Then another killer quake will come along that is even worse than the ones before.

Jesus likened these signs to a familiar human occurrence. He said they are the beginning of birth pains, or labor pains. They are the signs of the times the Bible tells us to be looking for that will alert us to the fact that Jesus Christ is coming back again. So as we see these things happen and increase in frequency, it means his coming is near.

Some people argue this has been going on for hundreds of years, that everyone thinks Jesus is coming back in their lifetime. I will grant that, but I would like to point out one thing to think about: Something really significant happened on May 14, 1948. The Jewish people who had been persecuted throughout history, who had been murdered in the millions by Hitler, began to return – as if on cue – to their homeland. And on that day in 1948, Israel was once again a nation. After the War of Independence, the modern state of Israel was declared, fulfilling a very significant Bible prophecy. It wasn't just a sign; it was a super-sign. And it happened against all odds. 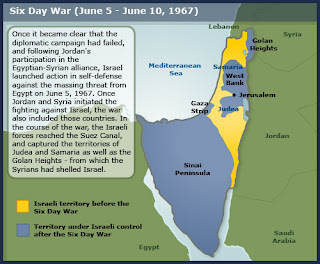 Still, it left the city of Jerusalem divided, with Jordan retaining control of the old city, including the Temple Mount and most of the historic area. But during the Six-Day War in 1967, Israeli forces were able to capture the old city and reunify all of Jerusalem. The city of Jerusalem was under Jewish control for the first time in many centuries, and another Bible prophecy had been fulfilled. The prophet Ezekiel said the Jewish people would be scattered and then regathered. After this takes place, he prophesied, Israel then would be isolated and ultimately attacked.

The Bible tells us that the end of the world as we know it, culminating in the final Battle of Armageddon, will happen in the Middle East. It also tells us that Jerusalem will be a key part of that as the nations of the world turn against her. In Zechariah 12:2–3, God said,

This is why we should not get our hopes too high when we see another Middle East peace treaty being signed. There might be a cessation of violence temporarily, but it will kick up again, according to what the Bible says. God says these things will happen, and he is telling us they are warnings we should be paying attention to.

Frankly, we don't know what will happen next in our world. Any one of us could be a victim of terrorism or violent crime in these volatile times in which we live. I wish I could say there never will be another tsunami or another earthquake or another hurricane or another terrorist attack. But we live in a fallen world. And we know it will come to an end.

So is the end of the world near? I don't know for certain, but clearly there are signs of the times. At the same time, we never know when life will come to an end. The statistics on death are pretty impressive: One out of every one person will die. There are no exceptions. And there are no chances after death to respond to God's offer of salvation through Jesus Christ. But there are hundreds, even thousands, before.

Israel primed to attack a nuclear Iran - The Guardian

What signs indicate that the end times are approaching? - GotQuestions.org

Signs of the Times What the Bible says about The Rapture, Antichrist, Armagedon, Heaven and Hell - Greg Laurie (Book)