After Decades of Decline, the Total Number of Jews in the World Has Increased

According to the Berman Institute and the Jewish Data Bank, there had been a steady decline for several decades in the worlds Jewish population but the trend has been reversed and an increase has been recorded recently even though it is very so slight in numbers. The number of Jews outside Israel continued its decline but their number increased inside Israel bringing the total Jewish population in Israel to around 5.7 million, the largest number of Jews in any one location anyplace on earth. Out of a world population numbering around 6.9 billion people there are only about 13 and a half million Jews in our world today which is slightly less that .2% of the world's total population 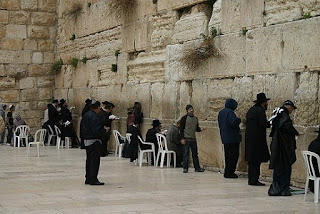 With less than .2% of the world's total population being Jewish, the world's focus is on these unique people who will be the major players in the end of times scenario that can be found in Bible prophecy.

Out of a world population that numbers 6.9 billion people, the Jewish people and their very small nation in the Middle East has attracted the attention of the world. It seems that daily some world leader is talking about the Jewish state of Israel and what is happening there as it relates to the existence of this young nation among the nations of the world. The Jewish people came into existence 4000 years ago when Abraham became the Father of the Jews and passed that heritage along to his son and grandson Isaac and Jacob. Though there have been countless attempts to destroy the Jewish people down through the centuries God has protected a people that He calls His chosen people, that is according to Deuteronomy 7:6-8. In fact, God divided humankind on this earth and he set the bounds for them based upon the Jewish people in this world - that's recorded in Deuteronomy 32:8.

Every student of Bible prophecy is aware that God's plan for the end times will happen in order to fulfill the Lord's promises to the Jewish people. Those promises found in the Abrahamic Covenant, (Genesis 15) the Land Covenant, (Deuteronomy 30) the Davidic Covenant, (II Samuel 7) and the New Covenant (Jeremiah 31).

Though the Jewish people are small in numbers in our world today, they will be the major players for the last days. Bible prophecy will be fulfilled.

Why did God choose Israel to be His chosen people? - GotQuestions.org