This week we learned that Nazareth is an al-Qaida hub. Sheikh Nazem Abu Salim Sahfe, the Israeli imam of the Shihab al-Din mosque in the city, was indicted on Sunday for promoting and recruiting for global jihad and calling on his followers to harm non-Muslims.

Among the other plots born of Sahfe's sermons was the murder of cab driver Yefim Weinstein last November. Sahfe's followers also plotted to assassinate Pope Benedict XVI during his trip to Israel last year. They torched Christian tour buses. They abducted and stabbed a pizza delivery man. Two of his disciples were arrested in Kenya en route to joining al-Qaida forces in Somalia.

With his indictment, Sahfe joins a growing list of jihadists born and bred in Israel and in free societies around the world who have rejected their societies and embraced the cause of Islamic global domination. The most prominent member of this group today is the American-born al-Qaida leader Anwar al-Awlaki.

US authorities describe Awlaki as the world's most dangerous man. His jihadist track record is staggering. It seems that there has been no major attack in the US or Britain - including the September 11 attacks and the July 7 attacks in London - in which Awlaki has not played a role.

Sahfe and Awlaki, like nearly all the prominent jihadists in the West, are men of privilege. Their personal histories are a refutation of the popular Western tale that jihad is born of frustration, poverty and ignorance. Both men, like almost every prominent Western jihadist, are university graduates.

So, too, their stories belie the Western fantasy that adherence to the cause of jihad is spawned by poverty. These men and their colleagues are the sons of wealthy or comfortable middle class families. They have never known privation.

Armed with their material comforts, university degrees and native knowledge of the ways of democracy and the habits of freedom, these men chose to become jihadists. They chose submission to Islam over liberal democratic rights because that is what they prefer. They are idealists.

This means that all the standard Western pabulums about the need to expand welfare benefits for Muslims or abstain from enforcing the laws against their communities, or give mosques immunity from surveillance and closure, or seek to co-opt jihadist leaders by treating them like credible Muslim voices, are wrong and counterproductive. These programs do not neutralize their supremacist intentions or actions. They embolden the Western Islamic supremacists by signaling to them that they are winning. Their Western societies are no match for them.

In recent weeks we have seen a number of statements by establishment political leaders in Europe indicating that they are willing to consider abandoning these politically correct bromides. German Chancellor Angela Merkel's statement last month that "multiculturalism has utterly failed," for instance, is widely perceived as a watershed event.

And in an op-ed in The Wall Street Journal on Monday, former British prime minister Tony Blair acknowledged that there is a problem with unassimilated Muslims in Britain. As he put it, anti-immigration sentiment is not general but particular. It relates, Blair admitted, to "the failure of one part of the Muslim community to resolve and create an identity that is both British and Muslim."

Blair acknowledged that it is due to the European establishment's refusal to recognize the problem of growing Islamic supremacism in Europe that so many millions of Europeans are today ditching the establishment and its politically correct orthodoxies and voting for anti-establishment politicians who are willing to address the problem. He called for a continent-wide approach to immigration whose goal would be to prevent jihadists from exploiting the system to overthrow it.

Statements like Merkel's and Blair's are insufficient. But the very fact that enough Europeans are willing to break the PC barrier to force these leaders to acknowledge and perhaps address the challenges of unassimilated, supremacist Muslim minorities means that Europe is taking the first steps towards addressing the challenges that jihadist Islam poses to its security, culture and civilization.

Perhaps most emblematic of this change was the Merkel government's recent move to finally close the mosque in Hamburg where the September 11 plotters met and planned their acts of war against the US.

Disturbingly, the establishments in the two countries most actively targeted by global jihad - the US and Israel - remain in deep denial about the challenges of homegrown jihadist fifth columnists. The US remains in denial even though the majority of recent jihadist attacks and attempted attacks against the US were carried out by American citizens. 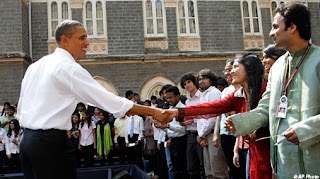 The US's denial of the nature of the jihadist threat was demonstrated in all of its politically correct glory this week with President Barack Obama's address to Indian students at St. Xavier University in Mumbai. In response to a student's query about his view of jihad and jihadists, Obama praised Islam as "one of the world's great religions." He went on to claim that the overwhelming majority of Muslims view Islam as a religion of "peace, justice, fairness and tolerance."

Obama's message was not only deceptive and off point, it was deeply insensitive to his audience. Two years ago this month, Mumbai was the site of a massive jihadist commando attack against targets throughout the city, and Mumbai's residents are still grappling with the wounds of that attack.

Obama's statement also ignored the US's contribution to that attack. The suspected mastermind of the Mumbai massacres was a US citizen named David Coleman Headley from Obama's hometown of Chicago. Moreover, Headley (formerly Daood Sayed Gilani) served for many years as a double agent. A convicted drug dealer, he was sent to Pakistan as a Drug Enforcement Agency agent. While there, he trained at Lashkar-e-Taibe jihadist training camps.

Obama failed to note that perhaps due to his work at the DEA, US law enforcement officials ignored testimonies from two of Headley's former wives in 2005 and 2007 that he was a member of Lashkar-e-Taibe, the India-focused Pakistani al-Qaida affiliate run by Pakistan's Inter-Services Intelligence agency.

Rather than address these issues, or the fact that the US has refused Indian extradition requests for Headley, Obama vacuously told students that it is the job of young people from all religions to reject extremism and violence.

Headley, of course, is just one of many American jihadists who has enjoined the fruits of America's politically correct denial of the homegrown Islamic threat. In the months following the September 11 attacks, the US Department of the Army actively courted Awlaki as part of its Muslim outreach program. Awlaki, then George Washington University's Muslim chaplain, was wooed despite his documented links to three of the September 11 hijackers.

As Israelis wake up to the reality of al-Qaida in Nazareth, our leftist establishment remains in denial about its role in enabling this reality. Sahfe's Shihab al-Din mosque was established as a triumphalist mosque adjacent to the Church of the Annunciation in the lead up to the millennium. At the time, the Vatican launched a vocal protest against its construction.

In the hopes of winning over the likes of Sahfe, then-prime minister Ehud Barak and then-foreign minister and public security minister Shlomo Ben-Ami rejected the Vatican's objections. They even donated the land for the mosque from the Israel Lands Authority.

Safhe returned the favor by interrupting Pope John Paul II's homily at the Church of the Annunciation during his March 2000 visit with a call to prayer. Months later, the Shihab al-Din mosque was one of the focal points for inciting the anti-Jewish riots in the Arab sector in October 2000.

Today, leftist judges together with leftist politicians and opinion makers block all efforts by politicians and the public to acknowledge and address the growing lawlessness and jihadist bent of Israel's Muslim minority. Fear of the politically correct Supreme Court has deterred authorities from outlawing the Islamic Movement. Efforts to contend with illegal land seizures and building have been blocked by the leftist media, pressure groups largely sponsored by the New Israel Fund and the courts. Even symbolic measures like the government's recent bid to require non-Jewish immigrants to pledge loyalty to the state have been viciously attacked by Israel's leftist establishment as fascist and racist.

But as Europe is belatedly acknowledging, these politically correct commissars must be sidelined if the free world is to withstand the growing threat of homegrown jihad.

What this means for Israel is that the political and legal space has to be found to speedily embark on the law enforcement equivalent of a counterinsurgency operation. Israel must enforce its laws with as much zeal and commitment in the Muslim sector as it does in the Jewish sector. This means that Shihab al-Din and other jihadist mosques have to be closed.

It means that jihadist groups like the Islamic Movement have to be outlawed and its leaders have to be tried for treason and other relevant offenses. The same is true for all Arab leaders, political groupings and social organizations that promote the destruction of Israel.

Building and zoning laws must be enforced. State lands that have been seized must be taken back, if necessary by force, including with the involvement of the IDF.

So, too, Jewish rights have to be protected. Like Muslims, Jews have the right to buy land and homes throughout the country. Jews who wish to live in Muslim-majority communities must enjoy the protection of the law just as Muslims who live in Tel Aviv and Upper Nazareth do.

By the same token, the government must embark on a campaign to win back the loyalty of its Muslim citizens. It must empower leaders who embrace their identity as Israelis and seek the integration of Israeli Muslims into the wider society. Authorities must ensure that Israeli Muslims who wish to integrate are not discriminated against by Jews or intimidated by other Muslims.

Over the past couple of weeks, IDF commanders have spoken at length about the nature of the war to come. Their remarks have concentrated on what is already largely recognized - that Israel's home front will be targeted by long-range missiles.

Disappointingly, they ignored the most significant new threat facing the home front today: The likelihood that Israel's external foes will receive active assistance from its Muslim citizens.

To remain free, free societies must shed our politically correct shackles and address this growing menace to everything we hold dear.