The Trouble with Troublemakers ...

… is that they are often truth tellers.

Take Geert Wilders, the Dutch politician who today is standing trial in the Netherlands for calling the Muslim book – the Quran – a fascist document.

Wilders is a man of immense courage. In a world where people – including his fellow countrymen – have been murdered and hounded into hiding for daring to speak the truth, he has almost singlehandedly dared to call the emperor (or in this case the “prophet”) naked; the founder of the “religion of peace” in fact a man of hate-driven and vicious war; Muhammed bereft of the clothing afforded by political correctness; bereft of the attributes that mark a truly holy or godly man.

In his online movie Fitna, Wilders has vividly shown the simple truth: Islam is a religion that encourages terrorism and violence against those who will not submit to the false god allah – especially if they belong to the people of the book – Jews and Christians. And Muslims are taught, from kindergarten age and up, that allah will give them victory over all non-Muslim nations.

His film contains all the footage, all the quotes and recordings to make his open and shut case.

Of course, the cowardly and obsequious leaders of the so-called free world have shunned and condemned Wilders. Needless to say the media – those valiant champions of “freedom of the press” – were the first and most enthusiastic to brand and condemn the Dutchman. 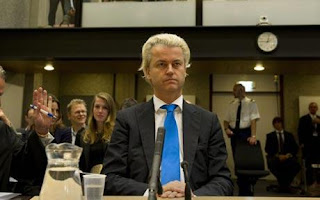 Today Wilders will stand in court, charged with “inciting discrimination and hatred.”

Not everyone is fooled. It is worth noting that today, in Dutch society – that is to say, in the Holland that for so long has been seen to be at the forefront of the liberalizing and tolerant trend in the world, increasingly comes out in support of Wilders. His party has just been made a shadow party in the incoming Dutch government.

Another troublemaker is Israeli Foreign Minister Avigdor Lieberman. Since joining his Yisrael Beiteinu (Israel our Home) party to Prime Minister Binyamin Netanyahu’s government, all the popular epithets guaranteed to blackball the man have been rolled out.

He is: “a notorious racist,” “a racist settler,” a “racist thug,” a “hard-line extremist,” “virulently anti-Arab,” a replica of “Mladic and Karadzic and Milosevic” who “speaks like a Russian nationalist rather than the secular Israeli he claims to be.” Lieberman is “the worst thing that could happen to the Middle East.” He is even “a Jewish Hitler.” (For your own list of slanderous names and accusations just Google the Israeli’s name.)

This troublemaker is being particularly troublesome today.

According to YNetnews, Lieberman has accused the Obama administration of trying to impose its will on Israel and its democratically elected government.

“During my recent visit to the US,” he reportedly informed members of his party, “I learned that Washington is planning to force a permanent agreement on Israel – two states for two peoples along the 1967 borders, plus-minus 3 or 4% of the territory exchanged.

“This is the objective of a continued freeze – to give the US and the international community two months to come up with a solution that will be forced on Israel.”

Lieberman believes that, in two months’ time, “the US, along with the Quartet, the Arab League and the Palestinians will tell Israel: ‘This is the solution, take it or leave it. If you don’t [take it], there is a price – a confrontation with the international community.’”

“[GOP advisor] Arthur J. Finkelstein told me not to deliver the speech, but I decided otherwise. I decided that I had to speak from the heart, and tell the world the truth as I see it,” he told his party.

And of course, while outraged liberals scream to the heavens against any idea of moving Israel-hating Arabs out of the Jewish state, they are silent as mice at the Palestinian Arabs’ wish to see every Jew removed from the land they want for their Arab state.

I don’t know enough about Avigdor Lieberman or his political outlook to say whether I would or would not support all his policies. And I guess I can say the same thing about Geert Wilders.

What I have learned, though, is that when extreme left wingers gang up on someone and try to switch him off or shut him down, as often as not it is because there is some very unpopular truth they are out to smother or conceal.

If Lieberman is telling the truth; if he has it down about White House-directed coercion of the Israeli leadership; if what we are witnessing with all the promises and threats out of Washington is an attempt by President Obama and Secretary of State Clinton to impose their will on the people of Israel, then I say to them:

“American leaders: Ware the Shepherd of Israel! Ware the Keeper of Israel! Ware Israel’s Rearguard! Behold, He who keeps Israel shall neither slumber nor sleep.” (Psalm 121:4) He will confound your plans; He will bring them to nothing; He will hold you in derision. (Psalm 2:4; Psalm 59:8; Psalm 71:13)

With all your might and power and greatness, you are to Him merely a drop in the bucket; dust in the balances. I’d think very carefully about what I was doing, if I were you.”

We Will Not Submit: The West and the Fight Against Islam - Geert Wilders (Book)