What Would Luther Say? — A Church Apologizes for Church Discipline

The great moral revolution on the issue of homosexuality collides with the total surrender of a liberal denomination, and the result is the church’s apology for having once stood on biblical grounds. That was the picture just a few days ago, when the Evangelical Lutheran Church in America welcomed three lesbian ministers into the clergy roster through a “Rite of Reception” ceremony held last Saturday at the Lutheran Church of the Redeemer in St. Paul, Minnesota. 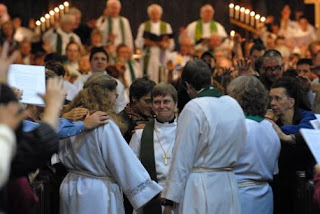 As the Star Tribune reported:

“In a ceremony that started with a public mea culpa and ended with a prolonged standing ovation, three lesbian ministers were officially embraced Saturday by the Evangelical Lutheran Church in America.”

This comes in the wake of the denomination’s vote this past summer to rescind a policy that prevented clergy in homosexual relationships from being listed on the church’s official clergy roster. Since then, conservatives have moved to organize a new Lutheran denomination.

The most interesting part of the “Rite of Reception” was a confession voiced by the congregation. Look closely at this:

We have fallen short in honoring all people of God and being an instrument for that grace. . . .We have disciplined, censured and expelled when we should have listened, learned and included.

That’s right — the church actually confessed the “sin” of having once stood on biblical ground and the “sin” of exercising church discipline.

What would Martin Luther say? It would doubtless be colorful and thunderous. But here is something he did say that fits the situation perfectly:

“You should not believe your conscience and your feelings more than the word which the Lord who receives sinners preaches to you.”

The Last Days Apostasy of the Church - BPB (Andy Woods)

God's Plan for the Gay Agenda - Grace to You (John MacArthur)