Surrendering to the Nameless Enemy

Nine years after George W. Bush went to a mosque and proclaimed Islam a religion of peace, all too many Muslims worldwide are less peaceful than ever, and the U.S. government is more determined than ever to ignore, deny, minimize, and even accommodate that fact.

As we pass the nine-year mark against the “Enemy That Must Not Be Named,” the Obama Administration seems bent on reinforcing for Islamic jihadists everywhere the idea that if they issue threats of violence, we will give them what they want.

Working straight out of the “Neville Chamberlain Playbook,” President Obama — as well as Gen. David Petraeus — asked Florida pastor Terry Jones to cancel his plans to burn the Koran on September 11.

Obama said that “this stunt that he is talking about pulling could greatly endanger our young men and women who are in uniform. Look, this is a recruitment bonanza for al Qaeda. You could have serious violence in places like Pakistan and Afghanistan.” 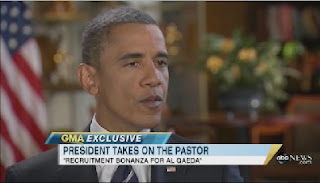 Obama, of course, finds the burning of the Koran, and the burning of any book, distasteful, as do I. But that is precisely why he should have stood up for Terry Jones, instead of suggesting that he stand down because of the possibility that people who had nothing to do with the Koran-burning could be hurt because of it half-a-world away.

As if on cue, that possibility became a reality Friday when 11 people who never met Terry Jones were injured in Afghanistan, in rioting against the prospect of the Koran being burned in Florida.

Who is responsible for these injuries? Terry Jones? No, despite the best efforts of Barack Obama, Gen. Petraeus and so many others to portray Jones as responsible for any violence in the Muslim world that may occur in response to his Koran-burning.

Obama and Petraeus and the rest have forgotten, or want us to forget, that one’s response to someone else’s provocative action is entirely one’s own responsibility. If you do something that offends me, I am under no obligation to kill you, or injure you, or run to the United Nations to try to get laws passed that will silence you. I am free to ignore you, or laugh at you, or to respond with charity, or to respond with insult, or any number of reactions.

Obama and Petraeus ought to be saying, “Yes, of course we disapprove of this Koran-burning, but in America we believe that freedom of expression is a fundamental bulwark against tyranny and hallmark of a truly free society, and it requires us to put up with things we don't like without responding with violence.”

They could, in other words, be using this as a teaching moment to demonstrate why free societies are preferable to Sharia states. But they don't dare do that, and instead are effectively reinforcing the principle that violent intimidation works: They know that some idiot is going to injure or kill someone in Afghanistan or somewhere because of this, and so they want Terry Jones to stand down.

Instead, they should be telling these Afghans to step back, take a deep breath, and realize that if someone burns a Koran in Florida, it doesn't harm them, or the Koran, or Allah, or Muhammad, and that to respond with irrational violence against people who are not involved with the burning (or even against the people who are involved with it) is just savagery.

Everyone in the world is so busy condemning Terry Jones that they have forgotten about freedom of expression, and why it is so important to reinforce even when we find the expression detestable — indeed, especially in such cases. And so, if we continue down this path, one thing is certain: that which is not understood or valued will not be protected, and so it will be lost.

Not coincidentally, the Sharia that the 9/11 terrorists killed and died for places severe restrictions on the freedom of speech.

Nine years after the World Trade Center was reduced to a smoking ruin by Islamic jihadists, we have gone past fearing to name the enemy. Now we are, to all intents and purposes, surrendering to him.

Separate the wheat from the chaff - WorldNetDaily (Henry Lamb)

9/11 events go on in shadow of Islam controversies - AP

To burn or not to burn - WorldNetDaily (Dave Welch)