"Only my girlfriend and my mother would support me. And I'm not sure about my mother," Bloomberg recently joked before an audience at Dartmouth college in answer to the question of whether he would run for president. "No, I'm not running. I want to make that clear." While Bloomberg does not appear to have presidential aspirations, the third-term mayor of New York City is the eighth richest man in America, founder of financial powerhouse Bloomberg, LLP, and leader of one of the most influential, culturally blended, and highest-profile cities in the world.

Whether or not Michael Bloomberg makes a presidential bid in 2012, his term as mayor of New York extends until 2013, and his political and financial clout are likely to carry on much longer. Dartmouth economics professor Bruce Sacerdote summarizes not only New York's role as an American microcosm, but also Bloomberg's role on the national stage as mayor of the city: "So many issues of the day relate to New York, including national security, the financial meltdown, financial regulation, school reform, and the polarization of the American political system."

Michael "Mike" Rubens Bloomberg was born to parents of Russian and Jewish descent on February 14, 1942. Bloomberg put himself through Johns Hopkins University to earn a BS in Electrical Engineering before earning his MBA from Harvard Business School. After he began his career as a partner for Salomon Brothers, he used his severance package to begin the company that would revolutionize financial media storage and consumption: Bloomberg LLP.

Bloomberg has backed and contributed to the political campaigns of candidates on both sides of the aisle, from George Bush to Harry Reid to Hilary Clinton. His own deep reserves of personal wealth allowed him to spend over $90 million of his own money on his mayoral campaign in 2001. Notably, the election to decide Mayor Giuliani's successor was to be held on September 11th that year, but for obvious reasons was postponed. Bloomberg has served as New York's mayor since. 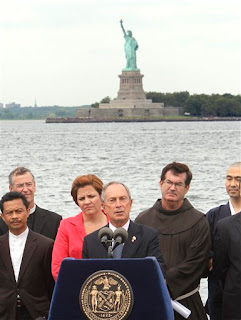 The mayor is in touch with his Jewish roots, but keeps his personal faith to himself. In the heat of intense public debate, Bloomberg defended the proposed Park 51 construction, known popularly as the "Ground Zero mosque." He recently delivered a speech against the backdrop of the Statue of Liberty in support of the mosque and community center development. Perhaps he hoped to silence local and nationwide critics who consider the mosque's proposed construction site insensitive to those who lost lives in the 9/11 attacks. More than likely, he just angered a significant part of the country.

Bloomberg is not especially tied to what the voters want. He feels that the government's role is to sometimes push past public opinion, to act in spite of public opinion. Polls show that as many as 63% of Americans feel a Muslim religious center at the proposed building site would be inappropriate. But Bloomberg cites the mosque controversy as a precedent setter for church and state issues.

"I believe that this is an important test of the separation of church and state," Mayor Bloomberg announced during his 9/11 address, "[It's] as important a test as we may see in our lifetimes - and it is critically important that we get it right."

Mike Bloomberg has delivered a mixed bushel of legislation to his Big Apple constituents, already making a legacy for himself with many firsts: He extended his stay in office by rewriting the law in 2008 to allow him a third term, successfully made public indoor spaces smoke-free in 2003, and passed the first ban on trans-fats in restaurants citywide. He is socially liberal: pro-choice, pro same-sex marriage, in favor of stricter gun control, and against capital punishment. On the other hand, he is a fiscally conservative Wall Street wizard, who seeks harsher punishments for illegal immigrants. He is also a champion of education reform, instituting new programs such as "Every Child. Every Day," aimed at reducing truancy and absenteeism in targeted schools throughout the metropolis. One of his most popular acts of public service was the creation of a 311 phone hotline which New York residents can use to report non-emergent crimes, graffiti, trash problems, and similar knocks against civilization.

Bloomberg's political views offer an unsavory mix for many Americans, and he openly admits how unpalatable they may be. He particularly offends conservatives who cannot reconcile Bloomberg's creation of nanny state conditions that can regulate fat and nicotine intake or public litter in the Empire State with his failure to defend the rights of the unborn in the womb or in the reproduction of stem cells. Bloomberg himself admits that his views are polarizing and often out of the mainstream.

The mayor also prides himself on defending the rights of citizens with whom he disagrees, such as Florida pastor Terry Jones who planned to burn copies of the Koran in a 9/11 protest against the Ground Zero mosque. "In a strange way I'm here to defend his right to do that," Bloomberg told the media, "I happen to think that it is distasteful. I don't think he would like it if somebody burnt a book that in his religion he thinks is holy... You can't say that we're going to apply the First Amendment to only those cases where we are in agreement." To other media sources, Bloomberg referred to Jones' protest idea as "bone-headed and wrong."

Mayor Bloomberg declines what would be a sizable mayoral salary, receiving just one dollar per annum in return for his civil services, and chooses to live in one of his own homes (of which he owns four) instead of the traditional mayor's quarters at Gracie Mansion. The official word from Bloomberg is that he plans to end his career in politics when his term as mayor finishes up in 2013 and will devote himself to full-time philanthropy after. In the meanwhile, he will likely continue to frustrate both sides of the aisle.

Shut Up, He Explained - Weekly Standard