Prime Minister Benjamin Netanyahu secretly has proposed a new plan whereby Jews living in the West Bank will remain in their communities after the territory becomes part of a Palestinian state, WND has learned.

Officials in both Israel and the Palestinian Authority have confirmed the plan to this reporter, marking the first time an Israeli leader has ever put on the table in a serious way a proposal involving Jewish West Bank residents remaining in a Palestinian state.

Conventional negotiations always has assumed an Israeli evacuation of its communities inside any territory taken over by the PA. 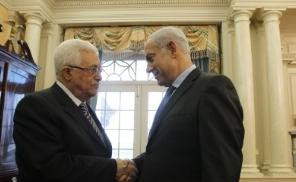 Middle East officials said the plan is being considered seriously by the Obama administration, while the PA has been less than enthusiastic. PA sources said they held a meeting last week over the plan.

The full details of the plan, such as specific security guarantees for the remaining Jews, were not disclosed.

It was unclear how the Jewish residents of the West Bank will react to a plan that would seemingly place their security in the hands of the PA, whose militia members have carried out scores of attacks targeting those very Jewish communities.

PA President Mahmoud Abbas has been on record multiple times speaking against Jews living in a Palestinian state.

Last month, Abbas drew condemnation from U.S. Jewish groups when he was quoted stating that not only must a Palestinian state be Jew-free, not even foreign Jews can serve in any NATO force that protect a future Palestinian country.

"I'm willing to agree to a third party that would supervise the agreement, such as NATO forces, but I would not agree to having Jews among the NATO forces, or that there will live among us even a single Israeli on Palestinian land," he was quoted as saying by Wafa, the official Palestinian news agency.

After his comments caused controversy, Abbas' aid, Nimar Hamad, told Wafa that "Abbas is open to an international force along Palestinian borders of any religion or origin."

Debriefing his cabinet on his trip last week to Washington, Netanyayu stated, "What is required is creative, novel thinking in order to resolve these complex issues."

Abbas asks US to step into settlement dispute - AP

Netanyahu: There is no guarantee talks will succeed - Jerusalem Post