Is Fresh Leadership Ahead in North Korea?

Chinese government-approved reports confirm a hush-hush visit between President Hu Jintao and North Korea's Kim Jong-Il last week. The meeting notably took place just as former US President Jimmy Carter arrived on an official visit to North Korea to negotiate the release of two Americans being imprisoned there. As far as public displays of affection go, Kim left Carter standing at the altar while he embraced China. China is the only country North Korea's secretive man behind the shades ever ventures to pay a visit to, and Kim's timing is uncanny.

Wretched US relations with North Korea have not improved during the Obama administration. Kim's government still claims no responsibility for the torpedo that destroyed a South Korean warship and killed 46 sailors in March, adding to existing tensions. Earlier this week, President Obama signed to expand financial sanctions against eight key North Korean businesses and four individuals. Stricter sanctions may also have been spurred by the DRPK's nuclear weapon and missile tests last year and the concern that Pyongyang's nuclear facilities now have enough plutonium to produce half-a-dozen or more atomic bombs. North Korean underground trade has ramped up enough to support not only US-dollar counterfeiting operations, but also further nuclear armament.

Though Beijing and Pyongyang have been allies since Chinese troops came to the aid of North Korean soldiers during the Korean War, the North Korea-China connection is worth watching for several reasons:

First, China has risen to the position of second greatest economic power on the globe, second only to the United States. A powerful country does not rule without directly or indirectly buoying its allies.

This brings us to Kim Jong-Eun, second son and likely successor to his ailing father's throne, who was included in the "Dear leader's" visit to Beijing. Kim announced before the assembled Chinese banqueters, that "steadily developing the friendship [between North Korea and China] through the generations is an important issue in defending peace and security" and that his trip was a "historical mission" conferring power to a "rising generation." This gives us some hints as to the purpose of his visit to China. 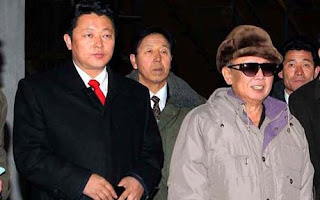 The DPRK's ruling Worker's Party is scheduled to hold a meeting next month, and political analysts suggest it would be a fitting time for the elder Kim to announce his intentions for son Kim Jong-Eun to assume his role in the dynasty. Kim has introduced his son to his allies in the Chinese leadership, smoothing the way for his succession.

Second, China's state-approved media have confirmed that Kim has been talking with Hu Jintao about renewing the six party talks - the negotiations between the US, North Korea, Russia, Japan, South Korea and China about the denuclearization of Pyongyang. North Korea walked out of the talks a year ago, and the Obama Administration has expressed reluctance to renew the discussions "simply for the sake of talk" if North Korea wants only to continue their race to arms. China has now approached Japan about continuing the talks. Japanese officials publicly declined reopening the six party discussion on Tuesday.

Third, from a human rights standpoint, China's economic strength allows it - perhaps forces it by its proximity - to prop up Kim Jong-Il's cash-poor authoritarian regime, keeping the DPRK government living high off the hog while its neglected population starves. It's a frightening irony that our dependence on products "made in China" provides this communist nation with the great economic power it holds today, and has given it the ability to support tyrants like Kim Jong-Il. The North Koreans would-be refugees who manage to escape detection while navigating the treacherous Korean peninsula reach China, instead of being sheltered from further abuse, are immediately captured by Chinese border guards and returned to the Korean authorities - a guarantee of execution or imprisonment in a labor camp. China certainly doesn't want to be flooded by refugees should Kim's empire collapse.

From both an arms trade and money-laundering standpoint, China provides a fence for North Korea's illicit goods and fronts. The US Treasury Monday accused two specific culprits of illicit trading activities - Chun Byong-ho, leader of the Second Economic Committee of the Korean Worker's Party, and alleged orchestrator for a major nuclear-related trade deal with Pakistan in the 90‘s, and Yun Ho-jin a DPRK arms chief and Pyongyang's special envoy and UN negotiator for the 1985 International Atomic Energy Agency assembly.

In May, a special UN Committee enforcing DPRK sanctions stated that it's finding the Second Economic Committee "plays the largest and most prominent role in nuclear, other WMD and missile-related development programs, as well as arranging and conducting arms-related exports" in North Korea. Such offices and committees have used the protection offered by China to openly conduct illegal trade that funds the DRPK and Kim Jong-Il's paranoid military stockpiling, drawing an outcry from Washington.

China is certainly not North Korea's only accomplice in arms trade or violence against democracy, however. For decades, Washington specialists and foreign defectors have followed the illicit business dealings of North Korea, connecting them to Syria, Myanmar, and Iran - countries that, now, and over decades, have hosted storefronts that serve as funnels for weaponry, contraband, luxury items, and illicit dealings that fund Kim's government. As far back as the 1960s, the North Korean military supplied fighter pilots to Egypt and Syria for attacks on Israel, and, according to one high-ranking defector, in the 1980s the Second Economic Committee sent Korean military experts to work side-by-side with the Islamic Revolutionary Guard Corps in Iran.

Pray for the upcoming shift in leadership as the elder Kim transfers power to his successor. Pray that this successor has a softened heart, open eyes, surrounds himself with good counsel, and makes changes for the better in the country he leads. Pray that American diplomats and leaders maintain the right kind of relationships, allies, and business partners. Pray that China uses its power for good in the world. And pray that Christ's followers in every country shine His light and lead others into the freedom that only the Truth (and The Way and The Life) can give.