The Feast of Tabernacles

The Feast of Tabernacles, or Succoth, begins on the 15th of Tishri and lasts for eight days. This year Succoth will begin at sunset on Wednesday, September 22. The word Succoth (also spelled Sukkot) means "booths", and refers to the temporary dwellings that are built and inhabited during the festival. The Feast of Tabernacles, or the Feast of Booths as it is sometimes called, is a joyous holiday and a time of feasting and commemorates the 40 years that the nation of Israel wandered in the wilderness before entering the Promised Land.

It is fascinating to visit Israel at this time and observe the temporary "booths" built in the traditional way, leaving deliberate gaps in the branches to view the stars at night to let the wind blow through during the day. 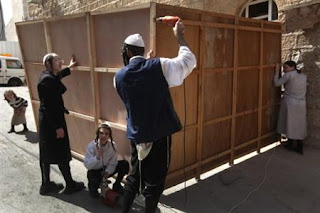 At the end of the eight days, the Jews leave their temporary dwellings to return to their permanent homes. (This is one of the reasons some suspect that this feast, rather than the Feast of Trumpets, is suggestive of the Rapture of the Church.) This day, traditionally, is the day that Solomon dedicated the first Temple.

In the time of Jesus, Succoth involved a daily processional to the Pool of Siloam to fetch water for the Temple. This ceremonial procession is the setting for the events of John 7, where Jesus offers his listeners "living water." This procession involved four types of branches: the willow, the myrtle, the palm, and a citrus (Leviticus 23:40). The willow has no smell and no fruit. The myrtle has smell, but no fruit. The palm has no smell, but bears fruit. The citrus has both smell and bears fruit. This sounds reminiscent of the four soils of the first "kingdom parable" of Matthew 13.

As Christians we may not celebrate many of the traditional Jewish holidays, yet they hold great spiritual and prophetic significance. Colossians 2:16-17 says, "Let no man therefore judge you in meat, or in drink, or in respect of an holyday, or of the new moon, or of the sabbath days: which are a shadow of things to come." [emphasis added]

Most observers note that the three feasts in the first month of the religious year - Passover, Feast of Unleavened Bread, and Feast of First Fruits - are prophetic of the Lord's First Coming. They each were also fulfilled on the day they were observed.

Between these three feasts and the final three feasts is the Feast of Weeks, or Pentecost, which is predictive of the Church. (It is also the only feast in which leavened bread is ordained!)

It is believed that the last three feasts, in the seventh month, are prophetic of the Lord's Second Coming. Many believers are particularly watchful each fall in the hopes that "this" will be the year these final three feasts are fulfilled.