This article is a postscript to a recent article called Israel, Iran, and the Ishmaelites, which emphasized the present desperate Saudi push for Mideast peace. In a nutshell, Saudi King Abdullah took his Mideast peace plan of 2002 out of the archives and pitched it to the Arab League in Cairo on July 28, 2010. As a result of his stature and salesmanship, the Arab League pledged their support to Palestinian President Mahmoud Abbas to enter into face-to-face “Direct (peace) Talks”, should he desire, with Prime Minister Benjamin Netanyahu.

This geo-politically expedient Arab League decision came on the heels of Netanyahu’s July 6, 2010 comments that he is willing to conduct “Direct Talks” with the Palestinians. All of the above came as good news to U.S. President Barack Obama, who from day one in the oval office has advocated a Mideast foreign policy of “Engagement.” His aim is to have all adversarial parties in the Mideast talk through their territorial and ideological differences. Some have criticized his “Engagement” policy calling it naïve; however, volatile Mideast conditions seem to be pressing the need for final diplomatic discussions. 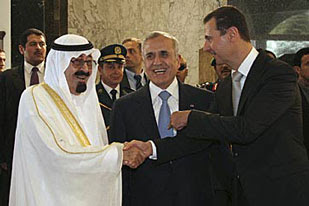 Departing with a sense of accomplishment, Saudi King Abdullah left Cairo and headed for a historic Beirut conference with Syrian President Bashar Assad and Lebanese President Michel Suleiman. King Abdullah had not visited Beirut since March of 2002 at which time he had pitched his peace plan to the Counsel of Arab States. This extremely pro-Arab peace plan was accepted by the Arabs at the time. However this trip, somewhere in the 363 mile shuttle between Cairo and Beirut, Abdullah’s previously endorsed peace plan lost its importance and sense of urgency as the Saudi King was forced to abruptly shift his focus toward mounting tensions in Lebanon.

The Beirut summit primarily ended up addressing genuine concerns that Sunni-Shiite violence could erupt as soon as the results are made public of the UN court probe into the assassination of former Lebanese Prime Minister Hariri in 2005. The UN court is apparently preparing to implicate members of the powerful Hezbollah in Hariri’s murder. Hezbollah is not expected to respond favorably to any assassination indictments from the UN. In fact, recent increased Hezbollah troop buildup in Southern Lebanon has caused Lebanese villagers in the area to clash with UNIFIL (United Nations Interim Force in Lebanon) soldiers.

Furthermore, Hezbollah has essentially disqualified the role of the UN in Lebanon over the past four years by defying UN Resolution 1701. This UN resolution called for the disarmament of Hezbollah in the aftermath of its 34-day conflict with Israel in the summer of 2006. Presently Hezbollah has assembled an arsenal of approximately 60,000 more advanced rockets, inclusive of Syrian Scud Missiles, and they have accomplished this during UNIFIL’s watch.

The Saudi King was requested to support Syrian and Lebanese wishes to discourage the possibility of any Hezbollah involvement in the Hariri assassination. The King’s peace plan was overpowered by this Hariri matter and other more pressing issues currently developing inside Lebanon. These matters included the following:

Peering through the smoke screen of the Middle East peace pipe it becomes alarmingly possible that the international community, including the Arab League and their Persian nemesis Iran, is headed for a war wake-up call in the very near future. Direct talks between the Israelis and Palestinians, should they occur, are headed for high hurdles for the following reasons: These are just a few of the reasons Middle East peace continues to allude the grasp of the international community. King Abdullah’s peace plan has mustered up Arab League support for “Direct Talks” between the Israelis and Palestinians. Additionally, it has encouraged President Obama that the Arab League seems to appreciate his Mideast foreign policy of “Engagement”. However, the current content of the Saudi Peace Plan will prevent Israel from accepting it as a legitimate plan for Mideast peace. Tensions in Lebanon may push the Saudi Peace Plan back into the archives where it had been collecting dust for over 8 previous years.