It’s unbelievable but true: the imam of the projected Islamic supremacist mega-mosque at Ground Zero, Feisal Abdul Rauf, is on a grand tour to Qatar, Bahrain, and the United Arab Emirates – paid for by the U.S. State Department with taxpayer money.

The State Department confirmed Tuesday that they were sending Rauf on this mission. “He is a distinguished Muslim cleric,” insisted P. J. Crowley, a State Department spokesman. Crowley explained: “We do have a program whereby, through our Educational and Cultural Affairs Bureau here at the State Department, we send people from Muslim communities here in this country around the world to help people overseas understand our society and the role of religion within our society.”

Crowley emphasized that Rauf’s trip was nothing new: he said that the State Department had “a long-term relationship” with the famous imam, and pointed out that in 2007 the Bush State Department sent Rauf to Morocco, as well as to Bahrain, Qatar, and the UAE. Obama sent Rauf to Egypt last year.

Why have two administrations been so anxious to underwrite this Islamic supremacist cleric’s globetrotting? Crowley explained that Rauf’s “work on tolerance and religious diversity is well-known and he brings a moderate perspective to foreign audiences on what it’s like to be a practicing Muslim in the United States.”

One wonders what definition of “moderate” Crowley, and the Bush and Obama State Departments, use. Rauf openly touts the virtues of Islamic law, Sharia, in his book What’s Right with Islam. Although he covers his arguments in blandness and protestations that there is no significant difference between Sharia and America’s founding principles, he never gets around to discussing the elements of Sharia that outrage principles of human rights that are otherwise universally accepted: the draconian punishments of stoning for adultery and amputation of the hand for theft; the death penalty for those who leave Islam; the institutionalized subjugation of women and non-Muslims; and more.

Notably, however, he does call in the book for restrictions on the freedom of speech. Rauf has compared the West unfavorably to the Islamic world, since the West “protects the right to say anything, no matter how insensitive or scandalous,” while Islamic cultures “balance freedom of expression with respect for elders, traditions and modesty. The idea of respect and honor to elders is deeply ingrained in their psyches.” He has criticized the Swiss ban on minarets as a restriction on religious freedom, without saying a single word about the severe restrictions on non-Muslim religious practice in Islamic states such as Saudi Arabia, Pakistan, Iran, and Sudan.

Rauf also says that “what Muslims want is to ensure that their secular laws are not in conflict with the Quran or the Hadith, the sayings of Muhammad.” For Muslims in the U.S., that will inevitably involve bringing Sharia here. 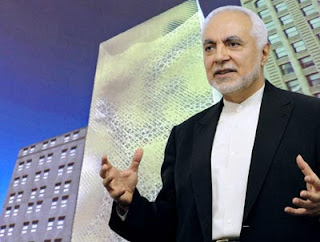 Rauf has also called Archbishop of Canterbury Rowan Williams’ endorsement of the implementation of Sharia courts in Britain “forward thinking” – and once again in doing so remained silent about Islamic law’s institutionalized and divinely sanctioned denial of the freedom of speech, the freedom of conscience, and the equality of rights of all people before the law.

There are numerous other indications that Rauf is not the sterling example of Islamic moderation that the State Department assumes him to be. He has refused to denounce Hamas. He has lied about his commitment to religious dialogue, telling American non-Muslims that the Ground Zero mega-mosque will be dedicated to dialogue and harmony among people of different faiths, while telling the Arabic media that he doesn’t believe in religious dialogue. He has lied about whether the Islamic center planned for the Ground Zero site will contain a mosque or not, calling it a prayer room without bothering to mention that it will be a place for Islamic prayer, not Jewish or Christian or Hindu or Buddhist prayer.

After the Fort Hood jihad massacre, Rauf made the patently dishonest claim that the shootings were “against the laws of Islam.” None of the mainstream media reporters who dutifully relayed his words to the public bothered to ask him what he meant when Fort Hood shooter Nidal Hasan’s writings came to light, explaining (with copious references to the Qur’an) the Islamic religious obligation to wage war against infidels. Rauf, as a leading American “moderate,” was in an excellent position at that time to explain in the American public square exactly how his version of Islam differed from Hasan’s, so as to allay the legitimate concerns of non-Muslims and emphasize to Muslims in America how and why they should be unreservedly patriotic Americans. He passed up the opportunity.

Belying his reputation as a “moderate,” Rauf is involved with a group that helped fund the jihad flotilla against Israel. He has also lied about whether or not the project is getting foreign funding, telling the American media that the Ground Zero mosque would be funded solely by contributions from Muslims in the United States: “We hope to raise it from a combination of gifts from the local Muslim community and perhaps from some combination of bonds or something like that.” But then he told the Arabic-language Asharq Al-Awsat that “the Islamic center will be financed through contributions from Muslims in the US, as well as by donations from Arab and Islamic countries.”

Rauf has blamed the West, rather than Islamic jihadists, for jihad terrorism, and he has done so more than once. He has said, according to Australia’s Sun-Herald, that “the US and the West must acknowledge the harm they have done to Muslims before terrorism can end.” He has also asserted that “Western active involvement in shaping the internal affairs of Islamic societies have contributed to the creation of terrorism done in the name of Islam.” About the role that the jihad doctrine has played in inspiring jihad terrorists, he has been notably silent. After the 9/11 jihad terror attacks, he said that American foreign policy had to be held as an “accessory” to those attacks.

Many years have passed, of course, since he said that. But now that he is an official emissary of the U.S. State Department, don’t the American people deserve at least some answers as to Rauf’s questionable statements and activities? Unfortunately, in increasingly elitist Washington, it is unlikely that the questions themselves will even be acknowledged.