The Prophecy of Ishmael and the Ground Zero Islamic Center

Some 68 percent of Americans do not want an Islamist center built near the hallowed ground zero of 911 where Muslims, carrying out the tenets of the Koran, killed nearly 3,000 innocent people. Crying religious freedom, even Hamas terrorist leaders are saying that Muslims should be able to worship wherever they please. And the man who occupies the Oval office has once again sided with the terrorists - he says its ok to build a mosque and Islamic center there. "Once again" because he has been doing it all along in supporting the Palestinian terrorist view of Israel, in extolling the virtues of Islam in official White House policy, and in refusing to control American borders, allowing terrorists in unabated.

So now, is this the issue that will stir the passions of all true Americans? Is this the straw that breaks the camel's back? Has this Islamic-raised usurper in the White House finally crossed the line? History, if Americans were actually taught it, would indicate that Islam has been at war with Jews and Christians for centuries. It was a prophecy of the angel of the LORD to Hagar about her son Ishmael, who is considered the patriarch of Islam. Genesis 16:12 says,

"And he will be a wild man; his hand will be against every man, and every man's hand against him; and he shall dwell in the presence of all his brethren."

Every place where you see human suffering either socialism or Islam is involved. This president touts both. 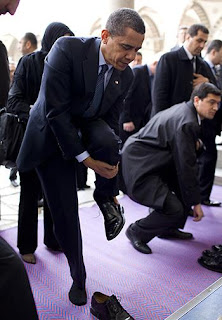 Now beware. In the days ahead there will be a deception in play. Islamists in America, in their spirit of respect and grace, will appear to back off from building an Islamic center near ground zero. But do not believe it. Do not stop pressuring the public sentiment. There are actually two entities that are to be built on the complex near ground zero - a mosque and an Islamic center. Watch these cunning Islamist leaders recant on the center, so they can keep the mosque. Watch how the media and the White House will praise them for being so sensitive. Then they will build the mosque as intended - a memorial to their struggle against the "great American satan."

Islam is an enemy of the state that uses religion to anchor the seed of its rancid and hateful agenda as it grows into a tyrannical political system. Americans have no business with a usurper in the White House who demands that Israel quit building houses on its own land, but fully supports Islam building a mosque near the site where it attacked Americans and spilled innocent blood. This is calloused disrespect for all Americans, especially to the families of those who died in the 911 attacks, and to those who have fought in this horrible war of Islamic aggression since then. Americans, especially Christian Americans, need to stand up and shout loud that even the deaf politicians hear the error of their ways.

The Ground Zero Mosque - What Have We Not Been Told? - FamilySecurityMatters.org

Obama and the mosque: Other politicians weigh in - USA Today