Israel Prepping for War with Iran?

Increasing speculation it may be preparing for a military assault on Iran or a regional war involving Hezbollah in Lebanon and Hamas in Gaza, Israel has placed its largest order of military fuel with the United States on record.

"It would be inappropriate for us to comment about what actions Israel may take or how they will use their fuel," Marine Corps Major Chris Perrine, a public affairs officer at the Department of Defense, told WND. "I would note, however, that it would take a lot more than fuel to attack a country or wage a regional war."

The sale was detailed in an Aug. 5 notification the Defense Security Cooperation Agency of the U.S. Department of Defense posted on its website, in compliance with the requirement to give Congress advance notice of foreign military sales. 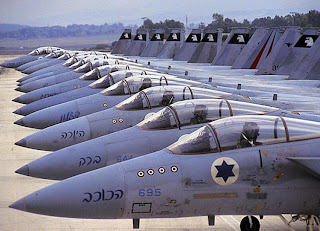 "The proposed sale of the JP-8 aviation fuel will enable Israel to maintain the operational capability of its aircraft inventory," the notification to Congress said. "The unleaded gasoline and diesel fuel will be used for ground forces' vehicles and other equipment used in keeping peace and security in the region. Israel will have no difficulty absorbing this additional fuel into its armed forces."

Tensions in the Middle East have escalated since Iran made its nuclear power plant at Bushehr operational with the assistance of Russia earlier this month.

John Bolton, a former U.S. ambassador to the U.N., has warned repeatedly that Bushehr would be much more difficult for Israel to attack after it went operational, largely because any military strike would release radioactivity that could be harmful to the civilian population.

Israel's unwillingness to attack the Iranian nuclear power plant at Bushehr before it went operational has caused considerable controversy within Israel.

Writing in the Jerusalem Post, columnist Caroline Glick observed that from a military perspective, the longer Israel waits to attack, the harder it will be for Israel "to accomplish the mission."

Still, many signs point to continuing tensions in the Middle East that could easily escalate into war.

The Jerusalem Post reported Aug. 20 that reports are circulating in the region that Frederick Hoff, assistant to U.S. Middle East peace envoy George Mitchell, told Lebanese Army chief of staff Jean Kahwaji that Israel was ready to implement a plan to destroy within four hours all Lebanese military infrastructure, including army bases and offices, should another border-fire incident occur between Lebanese military and the Israel Defense Forces.

Meanwhile, Iran has maintained an aggressive posture after activating Bushehr, successfully test-firing a third-generation surface-to-surface solid-fuel Fateh 110 missile with a 150-mile range and unveiling an Iran-manufactured drone bomber with a flight range of 620 miles.

Nevertheless, the White House cautions that Iran is not on the verge of developing a nuclear weapon.

Last week, Gary Samone, President Obama's top adviser on nuclear issues, was quoted as saying it would take one year for Iran to make "a dash" to convert existing low-enriched uranium to weapons-grade and to develop the nuclear warhead required for a working weapon.

Moreover, tensions between Israel and the Palestinians appear to be easing on the eve of resumed peace negotiations.

Israel Prime Minister Benjamin Netanyahu has expressed an interest in meeting with Palestinian President Mahmoud Abbas every two weeks as the two enter into direct peace talks next week in Washington.