Is Another Great Divide Coming?

Amnesty for 20 million illegals? That is what the faith community is pushing for including Catholics, Mainline Protestants and the National Association of Evangelicals. Compassion and common sense are at war. To brand all illegals as suspects hardly seems fair, but talk to Americans living near the southern border. The character of some illegals is that of destruction. They have destroyed property, livestock and human life. They have broken into homes and stolen everything not tied down and some things that were tied down! In recent weeks, 23,000 Mexicans have been killed in the drug war along the border. Kidnappings in Arizona have broken all records.

Most Americans appreciate the generations before us who went through hellish ordeals to come to the land of the free. My paternal grandparents fled the Czars of Russia to become merchants in America. They, along with millions more, endured filthy steerage quarters with one faucet for 200 people. Ellis Island was no picnic either. Sick kids were often sent back to the old country leaving parents in agony as to what to do. These immigrants paid a price beyond dollars and America is much richer because of them. I wrote about this in a true story, Gone the Golden Dream, published by Bethany House in 1981 and now out of print.

People of faith - both liberal and conservative - have now entered into this amnesty drama. The religious Left formed the Isaiah solidarity prayer vigil and fast across the summer. Members include Jim Wallis's Sojourners, United Methodist, Presbyterian, United Church of Christ, and Episcopal Church agencies, left-wing Catholic groups like Pax Christi, and the Islamic Immigration Center, among others. These organizations have a two-fold goal of legalizing the illegals and also of re-electing Barack Obama. All on the Left need the immigration vote to survive.

But in the fall of 2009, amnesty for illegals became an evangelical issue as well. The National Association of Evangelicals (NAE) adopted a pro-liberalized immigration stance that is creating ripples among its conservative membership. They are calling for a path to citizenship for illegals and "a realistic program to respond to labor needs" (Here is the resolution). Sen. Chuck Schumer, no friend of evangelicals, called this "a moral imperative for all people of faith."

Schumer read letters from other evangelicals signing on including NAE official Joel Hunter and Willow Creek's Bill Hybels. Hybels is quoted as saying,

"We believe that most Americans would be moved to pass comprehensive immigration reform if they could see the faces of immigration as we have seen them."

These leaders also stated that many of these illegals are actually evangelical Christians who are in their denominations by the millions.

Richard Land of the Southern Baptist Convention, and other notable conservative Christians, have signed on to An Evangelical Call for Bipartisan Immigration Reform. This document calls for all the right things until it gets to amnesty for illegals.

But plenty of evangelicals and conservative Christians are hesitating! The NAE Web site reveals only 11 of NAE's over 40 member denominations endorsing the immigration stance. And only 11 individuals are signers, though reportedly 75 NAE board members voted for it. 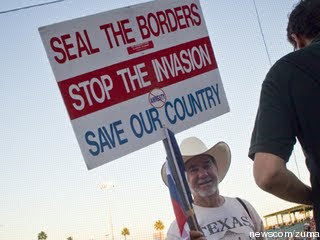 The question is, where does Christian compassion end and practicality rule in light of the fact that our borders are being crossed by some who seek America's demise or will contribute to its demise through crime and violence? The publication Human Events reports on the flood of Other Than Mexicans (OTMs) into America. Over l80,000 illegal aliens from countries other than Mexico were apprehended from 2007 through mid-March 2010. Even our State Department has acknowledged that tens of thousands are from Middle East countries and even Africa.

There is evidence that blatant terror groups such as Hezbollah have illegally crossed the border into the U.S. Tattoos have been found on drug gangs in U.S. prisons showing the influence of Iranian-directed Hezbollah terrorists. One of my radio guests who must remain anonymous has information that radiation has crossed our southern border on at least three occasions. Spell that dirty bomb. They're here. And many faith communities want to legalize them.

According to Christianity Today, polls show church members are deeply divided on this issue of amnesty for illegals. The often-quoted commandment in Leviticus 19 that "you shall not oppress the alien" provides no clear guidance on how the United States should set limitations on immigration. The question still remains, how do we balance justice against mercy toward those who have broken the law? And the United States is not analogous to ancient Israel. Biblical "sojourners" are not easily comparable to modern-era illegal immigrants. The "foreigners" in ancient Israel were non-Israelites who were permitted to pass through or reside in Israel. They were required to comply with Israel's laws and respect its customs.

Though most faith groups insist that their motivation represents a "Christian" rather than a "political" agenda, the 20 million illegals seeking amnesty will be quite a boon to the political Left. Illegals given amnesty could sway elections in 2010 and 2012. While many conservatives leaders mourn the dismantling of America by the current socialist regime, they are playing into their hands. Handing Barack Obama a second term as president in 2012, thanks to the illegal vote, could spell the demise of America as we know her. Capitalism is hanging on by life-support.

I think when Christian conservatives sitting in the pews learn that their leaders are pro-amnesty for illegals, they might have grounds to be a bit upset. We are dealing with the most hostile-to-Christianity administration in history, yet some conservative Christian leadership seems to be okay with that and will assist the efforts of the Obama administration thanks to their push for amnesty for illegals.

I believe the future of America should come before amnesty for 20 million illegal aliens and others crossing the borders, some of whom are blatant terrorists taking advantage of the system. I believe the hearts of the evangelicals are right but their motivation lacks common sense. To suggest that these illegals are members of evangelical churches seems to be a stretch as well. While a small remnant may be, the majority would not be found in the First Baptist Church of any city.

Church members have every right - and an obligation - to quiz their leadership and to regain assurance that compassion and not politics are at the root of this action. Our nation is divided now - yes, those crazy red states/blue states. Are evangelicals and conservative Christians about to hit a big divide as well? Is there coming a great divide between pulpit and pew as members find out that their leaders are contributing to the daily dilemma of a tanking America?