In an interview on KCBS Radio, Democratic House Speaker Nancy Pelosi called for an investigation into those who oppose the building of a mosque and Islamic center near Ground Zero of the 911 attacks by Muslim terrorists. Pelosi said, "There is no question there is a concerted effort to make this a political issue by some. And I join those who have called for looking into how is this opposition to the mosque being funded." So now all those who are expressing their disgust over this proposed Islamic monument to its 911 terrorist attacks should be investigated as to how they are getting their money. Some 68% of Americans oppose the mosque. That's a lot of government investigation proposed by Pelosi.

Instead, it might be wiser to investigate where the Muslims are getting their money to build the mosque and Islamic center, and whether the effort is being funded by those who support terrorism or the destruction of the United States. Let's start with Imam Feisal Abdul Rauf, founder of the American Society for Muslim Advancement and the organizer of the Ground Zero mosque initiative. Rauf has been billed as a "moderate" Muslim Imam who seeks to build the Ground Zero mosque to foster "peaceful Muslim-Western relations." Rauf refuses to say where the $100 million is coming from to build the mosque. He has told American media its being funded by donations from American Muslims. 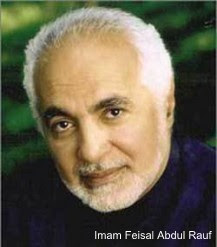 Rauf, however, in an interview with the Saudi-owned Arab newspaper Asharq Al-Awsat, says funding of the mosque will come from the US as well as from Muslims overseas. Rauf's American Society for Muslim Advancement is partially funded by the Saudis. Interesting that the State Department is sending Rauf on a goodwill mission to the Middle East - a mission Fox News says will take him to United Arab Emirates, Abu Dhabi, and Saudi Arabia. State Department spokesman PJ Crowley says, "we have informed him about our prohibition against fundraising while on a speaking tour. We do not expect him to fundraise." Yes, but what prevents him from fundraising on his own personal time during the trip? Probably nothing.

Meanwhile, the Ground Zero mosque issue is becoming such a political liability to the Democrats that Democratic New York Governor David Paterson plans to offer "state owned" land to Rauf's group in order to get them to move the project. Separation of church and state apparently only applies to Christians in America.

Pelosi wants an investigation into Americans who might be funding the mosque opposition, yet no investigation into whether terrorist money is being used to build it. The Democrats now want to provide state-owned property to build a Muslim mosque and community center.

2 Timothy 3:13 says, "Evil men and seducers shall wax worse and worse deceiving and being deceived." And so it is today.

Ground Zero Mosque Group Says It Has No Plan to Move Site or Meet With N.Y. Governor - CNS News