Gingrich Sounds the Alarm About the Stealth Jihad

Newt Gingrich has become the first major politician to acknowledge that the problem America faces today from Islamic jihadists is not simply one of terrorism, but of a larger attempt to insinuate elements of Islamic law (sharia) into American society, and to assert the principle that where sharia and American law conflict, it is American law that must give way.

The stated goal of Islamic jihadists around the world is consistent: to weaken non-sharia governments through terrorism as well as other means, so as ultimately to topple those governments and install Islamic law in their place. The non-violent means by which they work to achieve this goal were the focus of my 2008 book Stealth Jihad, in which I decried the universal tendency among both Republicans and Democrats to speak solely of the threat of “terrorism,” and to ignore completely the stealthy ways in which the terrorists’ agenda was advancing under our noses.

In a series of discrete initiatives generally advanced as “civil rights” or “religious freedom” issues, Muslim groups linked to the Muslim Brotherhood, an international organization whose stated goal is “eliminating and destroying Western civilization from within,” have pressed successfully in recent years for numerous special privileges for Muslims in American society. Footbaths for ablutions before Islamic prayers have been constructed in airports and universities; Muslim employees have been given special break times at factories, breaks that non-Muslims are not offered, so that they can pray at the prescribed times; and initiatives have been undertaken in the media and courts to stigmatize and marginalize anyone who speaks honestly about the nature and magnitude of the jihad threat. 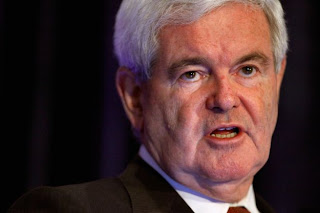 None of these initiatives may seem to amount to much at first glance; however, they should cause concern for two reasons: because in every case they further the principle that American law and custom should give way to Islamic imperatives, rather than that Muslims in America should adapt their behavior to American principles; and because of the connection to the Muslim Brotherhood, the progenitor of Hamas and al Qaeda.

And now Gingrich has become the first national politician to take notice of this threat. Speaking at the American Enterprise Institute on Thursday, he said:

“This is not a war on terrorism. Terrorism is an activity. This is a struggle with radical Islamists in both their militant and their stealth form.”

How Gingrich might distinguish “radical Islamists” from Muslims who simply believe in the Koran and the teachings of Muhammad, who declared that “Islam must dominate, and not be dominated,” is unclear. But his words are remarkable not for his maintaining the artificial and arbitrary distinction between Islam and Islamism, but because of his explanation of the stealth jihad:

“The stealth form believes in using cultural, intellectual, and political [means]. But their end goal is exactly the same.”

The stealth jihad advances without violent attacks at a time when almost all our “anti-terror” resources and energy are devoted to heading off another violent attack on American soil. Its leaders work within American communities and organizations, and quite often have won the respect and gratitude of their non-Muslim colleagues and peers.

The leaders of the stealth jihad enjoy the respect of the mainstream media, who often aid and abet their efforts to present themselves as benign civil rights advocates and conceal their actual agenda.

The stealth jihad has a good chance to transform American society before most Americans have any idea of what’s happening.

But Gingrich knows. And he also offered a solution:

“One of the things I am going to suggest today is a federal law which says no court anywhere in the United States under any circumstance is allowed to consider sharia as a replacement for American law.”

If such laws were adopted around the country and enforced against the many Muslim Brotherhood-linked Islamic groups in the United States (which include such ostensibly “moderate” groups as the Council on American-Islamic Relations, the Islamic Society of North America, the Muslim American Society, the Muslim Students Association, and many others), the stealth jihad could be stopped in its tracks.

We may hope that America’s lawmakers have the courage to heed the words of Newt Gingrich.

Florida Church to Burn Copies of Koran to Mark 9/11 - Newsblaze.com