When Ellen DeGeneres publicly came out of the closet as a lesbian, she did so with a cover spread on People magazine and a large caption proclaiming, "Yep, I'm gay." But coming out as gay is so '90s. Today's trendsetters have a much bolder message to proclaim: "We hate Jews, and we're proud of it!"

Last week, the latest anti-Semite to come out of the closet was British Prime Minister David Cameron.

In particularly flamboyant fashion, Cameron made his coming out proclamation via a press conference in Ankara standing side by side with his partner, the Islamic world's latest anti-Semitic hero, Turkish Prime Minister Erdogan.

Due to his blossoming-Hitler persona, Erdogan has recently emerged in the Islamic world as more popular than even Iranian President Mahmoud Ahmadinejad or Hezbollah's Hassan Nasrallah. And while the perennial scene of angry Islamists burning Israeli flags rarely changes, there has emerged a new element to these hate-fests. The latest and hottest trend combines burning Israeli flags with hoisting placards of Erdogan high in the air.

Ever since Prime Minister Erdogan's lunatic anti-Semitic rant at Davos last year, (shouting at Shimon Peres, Erdogan spewed, "You know very well how to kill babies!") many Turks, including the ruling AK party have been celebrating an extended Jew-hating coming-out party with some gatherings drawing thousands. And lest anyone claim that the exploding Jew-hatred in Turkey has been limited to peaceful anti-Zionist political sentiment, then I would point out the "We will kill you!" slogan painted on the doors of one of the largest synagogues in Izmir, or the "Do not buy from this business; it is owned by a Jew!" poster glued onto a store front in Istanbul. Neither of these hate crimes had anything to do with Israelis or "Zionists".

Indeed, the world has watched Turkey all but abandon its Westward push for EU membership and turn its affinities both East and South to the radical nations of Syria, Sudan, Libya and Iran. 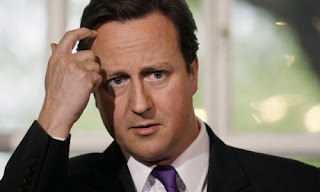 So no doubt, this was no mistake on Prime Minister Cameron's part.

By standing before the cameras with Erdogan at his side and lashing out at Israel, the British Prime Minister has made it clear where his affections lie – and where they do not.

But not only did Cameron choose to make his coming out appearance next to Prime Minister Erdogan, he also carefully chose highly loaded terms. "The Israeli attack on the Gaza flotilla was completely unacceptable," Cameron said, adding "Gaza cannot and must not be allowed to remain a prison camp."

Let's see, when I hear the term "prison camps," what immediately springs to mind?

That's right. The British prime minister has equated the State of Israel, "Democracy's outpost in the Middle East" to a modern reincarnation of Hitler's Third Reich. If he denies this was his intention, then he would have to admit that he is a blithering moron. But I have yet to see any public apology. Not at all. Instead he has stood firmly by his choice of words.

Even the BBC had to admit that no British prime minister has ever made such overtly harsh comments regarding Israel.

Erdogan, no doubt was thrilled to have England hopping on board the Turkish/Iranian led anti-Israel propaganda campaign. After the fallout of the Flotilla incident, it has emerged that Erdogan was closely connected to the owner of the Mavi Marmara boat that carried the martyrdom-seeking Jew-haters chanting their Islamist songs:

"Remember (the slaughter of) Khaibar oh Jews! The army of Muhammad will return!"

Then in classic tag-team fashion, Erdogan slapped Cameron's hand, jumped in front of the microphone and compared Israel to Somalian pirates.

I suppose those would be Nazi pirates then.

In considering Erdogan's absurd and irrational babblings, one has to wonder how sane he even is:

"[T]his attack … can only be termed as piracy. There is no other way to describe it. … The pirates are there in Somalia and we take our measures."

I know you are, but what am I?

This is the depth to which the diplomatic and personal maturity level of international leaders has fallen.

Thankfully there have been a few voices of reason that have responded to such folly. The former Israeli deputy minister of defense, Ephraim Sneh lashed back:

Cameron is right – Gaza is a prison camp, but those who control the prison are Hamas. I'm totally against the double standards of a nation which fights the Taliban but is showing its solidarity with their brothers, Hamas … It's very regrettable that the British PM doesn't understand that. It reflects a lack of understanding and is a very bad sign. Cameron doesn't understand that 1.5 million people live in Gaza under the repressive regime of Hamas – and yet he blames Israel.

One would also have to ask if Cameron is aware that within the very charter of Hamas, the group that he has chosen to side with, is the Islamic apocalyptic tradition that makes Hitler's "Mein Kampf" seem mild:

[T]he Islamic Resistance Movement aspires to realize the promise of Allah, no matter how long it takes. The Prophet, Allah's prayer and peace be upon him, says: "The hour of judgment shall not come until the Muslims fight the Jews and kill them, so that the Jews hide behind trees and stones, and each tree and stone will say: 'Oh Muslim, oh servant of Allah, there is a Jew behind me, come and kill him" (Hamas Charter, Article 7)

Shame on you, Mr. Cameron!

Thankfully here in the United States, there still remains a strong base of support for Israel. But as so many have mourned of late, "elections have consequences." If we the people of the United States continue to allow ourselves to be governed by reckless leftists who refuse to represent us, there is little question that the United States will be the next in line to come join the Jew-hating nations of the earth.

We cannot allow this to happen.

Understanding the Arab-Israeli Conflict: What the Headlines Haven't Told You - Michael Rydelnik (Book)