Saudi Arabia has accused Iran of harboring al-Qaeda for much of the last decade. It says that in 2003, al-Qaeda launched its attacks against Westerners in Riyadh from Iran. The Saudis say Iran ordered the attacks. Since Saudi Arabia financed and sheltered al-Qaeda prior to the 9/11 attacks, it's significant that the Saudis are now accusing someone else of doing what they did. In the past, they've preferred to lay low and not remind the world of that connection. What's changed? 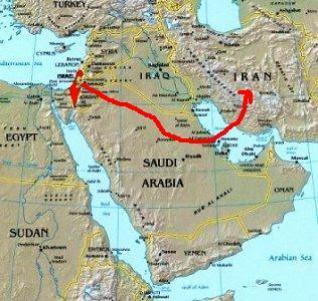 The Saudis are now making this very serious accusation public for the same reason that they've leaked the rumor that they will allow Israel to use Saudi airspace to attack Iran. They want the world to take them seriously when they say that they don't want Iran to be allowed to go nuclear.

Most people don't understand that Saudi Arabia, most of the Persian Gulf states, and Egypt are even more afraid of a nuclear Iran than Israel is. They've passed exasperation and are headed toward desperation because they can't make President Obama understand it, either.

Iran is working feverishly to surround Israel with its heavily-armed proxy nations and organizations: Syria, Lebanon, Hezbollah, and Hamas. Their newest friend, Turkey, may even play into this. Iran is determined to do this for two reasons. First, by forcing Israel to guard itself on many fronts, it makes an Israeli strike on its nuclear facilities even more difficult. Second, if something happens and Iran is not able to achieve nuclear capability, then a pincer movement by its proxies may still allow Iran to apply the death grip to Israel.

Saudi Arabia isn't the only nation trying to get the world's attention. Recently, Israel took the unusual - and dangerous - step of revealing some of its strategic intelligence information about Hezbollah in Lebanon. By showing the UN and the world (and, consequently, Hezbollah and Syria) what it knows about Hezbollah's military, artillery, and missile installations, arsenal and weapons warehousing locations, troop strengths, and emplacement locales, Israel effectively sacrificed its strategic advantage in the coming Third Lebanon War. However, Israel took this risk to show the world the gravity of the threat it faces from southern Lebanon. Israel also did this to show how Hezbollah has hidden itself among the civilian population in a cynical attempt to use the Lebanese as human shields and maximize the collateral damage from any Israeli counterstrikes. It wants the world to see precisely WHO will be to blame for civilian casualties.

How did the United Nations Security Council respond? The same way the mainstream media did: with a yawn.

Everyone knows that Mahmoud Abbas is the 'moderate' leader of the Palestinian National Authority. Of course he is. The western governments and media have told us so again and again and again. And he certainly seems to be that way when he speechifies... in English. But when he's with his own and speaking Arabic, he's not quite so 'moderate.' Just like his buddy and mentor, Yasser Arafat. Recently, Abbas told members of the Arab media that in March he told members of the Arab League that he's in favor of a pan-Arab military attack on Israel - but only if they'll all join together to do the deed. Abbas said that the Palestinians can't do it alone.

Apparently Mr. Abbas, like Arafat before him, were under the impression that if they made these horrendous statements in Arabic, no one in the English-speaking world would understand them. They couldn't, and can't, be that stupid. Probably more correct is they know that if they make these statements in Arabic, the mainstream media won't report them and the western powers will ignore them. You know, sort of a "hear no evil, see no evil" kind of thing. What we don't tell the unsuspecting West will never hurt them. And they may be right because, thus far, it seems to be working!

Well, it looks like a couple more nations are thinking about sending ships to Gaza to bust the Israeli blockade. Iran and Lebanon are making plans. It's odd that the Islamist nations have chosen Gaza as the symbol of Israeli oppression, especially since Gaza is the one place totally free of Israeli occupation. Israel completely withdrew from Gaza in 2005 - forcibly removing every Jewish resident in a bizarre, convoluted display of 'self-ethnic-cleansing' applauded by the world.

They turned over to the Palestinians all the land and infrastructure, and the former Jewish-owned farms, businesses, houses, synagogues, orchards, vineyards... all of it. The Palestinians promptly trashed everything Jewish and proceeded to turn Gaza into an armed terrorist camp. At their first opportunity, the Gazans elected Hamas to govern them. Then Hamas staged a violent coup and overthrew the ruling Palestinian National Authority.

Even the Egyptians have blockaded Gaza because of the threat to Egypt posed by Hamas and other terrorist elements. All the while, Hamas functions under a 'declaration of war' against Israel and has allowed terrorists to rain down more than 6,000 rockets and missiles on Israel.

So Israel blockaded Gaza to prevent the importation of materials with military applications - not food or medicine or other items necessary for daily life. Israel also hopes the blockade will persuade Hamas to stop its aggression toward the Jewish state. It defies logic that this aggressor is seen as the 'victim' by much of the world. But then, irrational prejudice is rarely logical.

Finally, this is the first time since Israel was reborn in 1948 that I cannot truthfully assess where the American government stands on the issue of Israel's continued existence. I know where Americans stand. They stand squarely shoulder-to-shoulder with the Israelis. But the current administration? I'm not sure. President Obama invited Israeli Prime Minister Netanyahu to visit Washington last week. Not to genuinely make nice and restore our relationship. And not to inform him that the President is finally going to allow shipment of the defense materiel previously authorized by the Bush Administration. In fact, Mr. Obama apparently turned down each of Mr. Netanyahu's requests for military supplies.

It now appears that Obama invited Netanyahu to Washington because the Democratic National Committee is panicked that campaign contributions from American Jews have dried up. The DNC wanted Obama to have some nice photo op moments with the Israeli leader so the American Jewish community will be reassured and will start writing the checks again.

Turkey unveils its own drone plane for first time - AP

The Everlasting Hatred: The Roots of Jihad - Hal Lindsey (Book)