I have resolved, for the remainder of his time in office, to refer to Iran’s Mahmoud Ahmadinejad, as “Chuckie,” after the psycho doll from those atrocious horror movies.

The doll came to life to murder and torment people, and of course he seemed indestructible. That was part of the fun of the Chuckie movies. 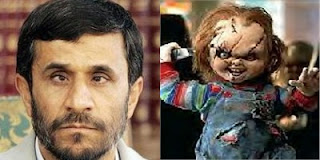 Ahmadineja…ahem, Chuckie, is neither fun nor fictional.

As president of Iran, he bears no resemblance to the ancient Cyrus, who, history records on a stone cylinder, fulfilled biblical prophecy (see Isaiah 44,45) by allowing the exiled Jews to return home and rebuild the holy city of Jerusalem.

Chuckie, on the other hand, is opposite in character. The 53-year-old former teacher and mayor of Tehran is an apocalyptic firebrand who has vowed to destroy the Jewish state.

No doubt, Israel has handled such types before, but never one who had such nuclear ambitions. In the one known instance of a dictator scrambling to obtain nukes and then point them westward to Israel — Saddam Hussein — the Israelis bombed Osirik back to the seventh century.

Iran looms as a more complex threat, simply because technologies have advanced, and one assumes the Arabs (keep in mind, however, that Iranians aren’t Arabs, but are of course Muslim kin) do learn a lesson or two every once in awhile and won’t allow their nuclear facilities to be above-ground and ripe for spotting from the air.

Since George W. Bush failed to solve the problem, and Barack Obama is contributing to it by his groveling before Muslim warlords, we can be certain that this is another problem the Israelis will have to handle for themselves.

As we look ahead with trepidation, toward what Israel might be facing as it seeks to block Iran from obtaining nukes, there is an interesting clue about Chuckie that we might find helpful, or at least comforting.

At first glance, Chuckie is a very smart man. Upon applying for the university in 1976, he placed 132nd out of 400,000 tested entrants (keep in mind that totalitarian regimes are notorious for inflating or even creating almost mythic achievements for their Dear Leaders, so Chuckie’s official history might be as reliable as a columnist for the New York Times).

However, his meddling in Iranian domestic affairs follows the same script as history’s other brutal dictators, who have, to a man, run their nations into the ground economically and socially. Chuckie’s dumb gas rationing plan, not to mention his interference in the interest rates private and public bankers could charge make it obvious that Iran’s internal collapse is already set in motion.

You see, I believe that what in the end will be Chuckie’s downfall as he tries to rid the world of Israel is the arrogance of a guy who doesn’t see his own weaknesses. This hubris is the hallmark of society killing dictators., from time immemorial.

A “leader” who would enact dumb business-sector reforms has blinders on. This is similar to Hitler mucking-about in battlefield strategies that should have been left to his generals. In the end, their most grandiose plans lay in wreckage.

While Chuckie is busy regulating interest rates, he will also become more emboldened in the face of limp-wristed sanctions imposed on the Iranian people. This will take him to the brink with Israel and — you read it here first — the eternal Jewish people will deal him a knockout blow from which he will never recover.

Netanyahu, who lost a brother at Entebbe, and who was himself wounded in battle, and who has stood at the graves not only of recent fallen IDF troops and those Jews murdered at Auschwitz … there’s no way he will fail to act when it comes to the latest Persian attempt at Jew extermination.

Germany’s Angela Merkel just announced that Iran’s cooperation with the International Atomic Energy Agency (IAEA) is not progressing. No kidding.

Israel’s outgoing ambassador to the UN, Gabriella Shalev, has stated that she believes even above the Iranian threat, Israel faces a great challenge: efforts by the international community to isolate and criticize the Jewish state.

“Israel is the most isolated country in the world,” she said last week.

The two go hand-in-hand, however: Chuckie’s apocalyptic efforts and the hatred of the international community toward Israel.

It is thought that Iran’s nuclear facilities are scattered around the country, and hidden deep underground. No doubt this is true. And further, there is no doubt that Zechariah’s scenarios are coming into play, into sharp focus.

Yet we err if we fail to see that, just as the Lord has fought for His people time and again over millennia, He and they will emerge victorious again.

Sixty years ago, the failed attempts of the German corporal — who thought he knew better than his military planners — brought him to suicide in a bunker as his enemies literally ran over him from above.

The same fate awaits the killer dwarf from Tehran.

The Persians are going down again.