As Muslims around the world continue to deny basic human rights to women and non-Muslims, Muslim spokesmen maintain a pattern of denial and deception.

Sakineh Mohammadi Ashtiani, a 43-year-old Iranian woman, is facing death by stoning this week for adultery, a capital crime in Iran. Yet when the redoubtable human rights activist David G. Littman, asserted at the United Nations Human Rights Council in 2008 that “the stoning of women for alleged adultery still occurs regularly in Iran,” Iran’s spokesman declared that this was “not true, it is completely false and is out of the question.”

Sakineh Mohammadi Ashtiani would beg to differ, and she’s not the only one: according to another human rights activist, Mina Ahadi, “at least 40 to 50 other women are waiting for the same destiny in Iran right now.” 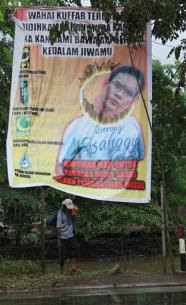 Meanwhile, in Indonesia this week, Christians in the city of Bekasi are facing an escalating persecution from Muslims. On Saturday, members of a group called the Islamic Defender Front hung outside a mosque a picture of Christian leader Andreas Sanau with a noose around his neck and the inscription, “This man deserves the death penalty!” Sanau’s crime? He is falsely accused of organizing mass baptism of Muslims in Christianity, in violation of Islam’s prohibition against conversion to another religion (another capital crime in Islamic law).

“In the first months of 2010,” according to Asia News, “radical Islamic groups have interrupted Christian religious services, prevented Christians from entering their churches and blocked the building of new churches.”

This is in accord with traditional Islamic law for non-Muslims in an Islamic state, which forbids these subject peoples to build new houses of worship or repair old ones. One of the Muslims involved in this persecution explained:

“We are doing this because we want to strike fear in the hearts of Christians.” This echoes the Koran, which commands Muslims to “strike terror into the hearts of the enemies of Allah and your enemies” (8:60).

Yet it was with a straight face in 2009 that the Imam Hassan Qazwini of the Islamic Center of America in Dearborn, Mich., restated a very common assertion of Muslim spokesmen in the West:

“Most Americans do not know that Islam respects Christians and Jews.”

All too many Muslims, in Indonesia and elsewhere, don’t seem to know it either.

Also this week, Afshan Azad, a 21-year-old actress who has appeared in several Harry Potter movies as the character Padma Patil, fled from her home after she was beaten and, according to the U.K.’s Daily Express, “badly bruised” by her father and brother - both Muslims - for refusing to break up with her boyfriend, a Hindu. Islamic law forbids Muslim women to marry non-Muslim men, and Abdul Azad and his son Ashraf were allegedly willing to murder Afshan for daring to flout this prohibition.

Muslim spokesmen in the West routinely deny that honor killing has anything to do with Islam, even though over 90% of honor killings worldwide take place in an Islamic context, many Muslim countries have relaxed penalties for honor murders, and Islamic law stipulates no penalty for a parent who kills his child. Here again, Afshan Azad might beg to differ with the prevailing denials and evasions of responsibility on the part of Muslim spokesmen in the West – that is, if she herself weren’t suffering from an apparent attack of Stockholm Syndrome, as she has asked police to drop all charges against her father and brother.

While it may be unpleasant for Afshan Azad if criminal proceedings against her father and brother continue, it would be disastrous for far more people if they were dropped. For the denial and obfuscation about the tolerance for honor killing in Muslim communities in the West only ensures that more Muslim girls will be murdered. And the larger denial on the part of Muslim spokesmen when confronted with atrocities that have been explicitly perpetrated in the name of Islam and justified by reference to Islamic texts and teachings only ensures that such atrocities will continue.

But that doesn’t seem to be a problem that troubles anyone.