Enemies of the Cross

In 1897 Irish novelist Bram Stoker published his most famous work, “Dracula” about an aristocratic Transylvanian vampire that stalked the night (and the nightmares) of Victorian England.

Although the novel, Dracula enjoyed great literary reviews, it wasn’t until Hollywood turned it into a movie script that the vampire legend became part of popular Western culture.

Stoker chose the name “Dracula” primarily because the name means “dragon” or “devil” in Romanian. Stoker’s vampire hunter, Dr. Van Helsing, explains why his crucifix would protect him from the count:

“There are things that so afflict him that he has no power … as for sacred things, as this symbol, my crucifix … to them he is nothing, but in their presence he take his place far off and silent with respect.”

In the classic film version, Bela Lugosi would hiss and snarl and back away from a crucifix; in later movies, any cross would do, including two crossed sticks.

In Richard Matheson’s I Am Legend (1954), the protagonist, Robert Neville, notices that only some vampires fear crosses. He eventually concludes that these vampires were Christian in life. They fear crosses because they believe that they ought to. Neville explains,

“As far as a cross goes — well, neither a Jew nor a Hindu nor a Mohammedan nor an atheist, for that matter, would fear the cross.”

This interpretation appears again in Roman Polanski’s The Fearless Vampire Killers (1967). Here, a woman presents a cross to an undead Jew who merely laughs and states, “You’ve got the wrong vampire.”

What made Dracula such a hit in Victorian England and early 20th century America was the contrast between absolute evil, represented by Dracula (dracul – the ‘devil’ Dracula – ‘son of the devil) and absolute good, represented by the Cross of Christ.

The absolute evil of Dracula was utterly powerless when confronted by the symbol of the Cross of Christ. When facing it, even the immortal undead Count Dracula had no choice but to bow his head and back away.

That is what thrilled the audiences of yesteryear. Not the power of the undead. The Power of the Cross. 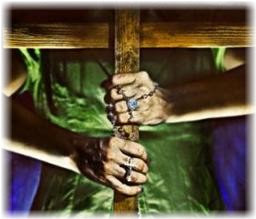 As society secularized, movie vampires became increasingly immune to either crosses or holy water. In the modern Twilight series, one vampire actually keeps a large wooden cross in his study.

Modern audiences are more impressed with the power of evil to triumph over good.

Last year, the vicar of a church in England’s West Sussex ordered a large sculpture of a crucifix removed from outside the church because “it was scaring young children.”

The sculpture once located at the side of St John's Church in Broadbridge Heath, has now been given to Horsham Museum. The Reverend Ewen Souter told the BBC:

I can sympathize and even agree with the principle that the empty cross symbolizing a risen Christ is more powerful, but removing a crucifix because it scares little children hollows any theological justification.

It is the job of the Church to teach Christ crucified in order to explain the purpose of the miracle of His Resurrection.

That same week, the vicar of another English church, this one in Cheshire permitted the British TV show, Coronation Street to film a wedding scene at the altar of St Mary’s Church.

Reverend James Milne later called the decision by the producers to hide the cross displayed on the altar so as to avoid offending viewers ‘a disgrace.’

In Spring Lake, Illinois, Reverend Ian Lawton, pastor of the Christ Community Church ordered their cross removed from the steeple after changing the name of the organization to the C3Exchange.

Lawton said the changes were designed to reflect the church’s growing diversity and the open-mindedness of the church members. One of the problems with being too open-minded is that if you’re not careful, your brains might fall out. That seems to be the case with C3Exchange.

“Our community has been a really open-minded community for some years now. . . We’ve had a number of Muslim people, Jewish people, Buddhists, atheists. ... We’re catching up (to) ourselves.”

Lawton said the church decided to change its name about a year ago and began taking ideas from members. He said the new name was chosen because the church is on Exchange Street, and “our community is a place where people can come to exchange ideas.”

He said the church is considering painting a heart, a globe and the word “exchange” on its exterior wall on the side where the cross stood, to symbolize “one love” for “all people.”

“The cross,” Reverend Lawton said, “has become a negative symbol for a lot of people.”

Lawton outlined his plan for ‘dechurching’ the former Christ Community Church building’s interior over the next year, replacing Christian-themed banners and rearranging the building’s layout.

“We want to make the whole experience from the moment people walk in the church ... to match our inclusive identity,” he said. “We’re not trying to change anyone, because we say, ‘Come as you are.’”

Which begs the question, ‘Why bother?’

"Which none of the princes of this world knew: for had they known it, they would not have crucified the Lord of glory." (1st Corinthians 2:8)

Ephesians 2:8-9 says that salvation is a gift of grace through faith and not of works, lest any man should boast. One doesn’t need to be a theologian to be saved. One needn’t ever attend a church of any description to be saved.

But apart from the Cross, there is no salvation. The Scriptures say that all have sinned and come short of the glory of God and that even one sin is too many to have fellowship with God.

Sin is punishable by death. Jesus lived a sinless life and paid our sin debt on the Cross.

“For He is our peace, who hath made both one, and hath broken down the middle wall of partition between us; Having abolished in His flesh the enmity, even the law of commandments contained in ordinances; for to make in Himself of twain one new man, so making peace; And that He might reconcile both unto God in one body by the cross, having slain the enmity thereby:” (Ephesians 2:14-16)

The oldest lie in the Book is the one used to tempt Eve; “Ye shall be as gods.” We want to believe we play a role in our salvation, which would give us God-like power.

“But God forbid that I should glory, save in the cross of our Lord Jesus Christ, by Whom the world is crucified unto me, and I unto the world. For in Christ Jesus neither circumcision availeth any thing, nor uncircumcision, but a new creature.” (Galatians 6:14-15)

The Cross is the symbol of God’s power. The Cross symbolizes the reality that God does all the work. It robs the enemy of his most effective tool. The enemy hates it. So the world hates it.

“And even as they did not like to retain God in their knowledge, God gave them over to a reprobate mind, to do those things which are not convenient . . .” (Romans 1:29)

As the crosses come down, the minarets keep going up. It’s irrational, but that is the nature of the supernatural. The evidence is all around us.

“For many walk, of whom I have told you often, and now tell you even weeping, that they are the enemies of the cross of Christ: Whose end is destruction, whose God is their belly, and whose glory is in their shame, who mind earthly things.” (Phillipians 3:18-19)

The enemies of the Cross aren’t winning. They are separating themselves from the Cross in preparation for the coming judgment.

“And for this cause God shall send them strong delusion, that they should believe a lie, that they all might be damned who believed not the truth, but took pleasure in unrighteousness.” (2nd Thessalonians 2:7)

These are the last days. They are supposed to be ‘perilous times.’

What does the Bible say about vampires? - GotQuestions.org