A litigation time bomb set by Martha Coakley – who remains state attorney general despite losing her Senate race – exploded last week in a Massachusetts courtroom. Federal Judge Joseph Tauro, who received his lifetime appointment from Richard Nixon in 1972, upheld Coakley's position in a lawsuit she filed a year ago against the federal Defense of Marriage Act. 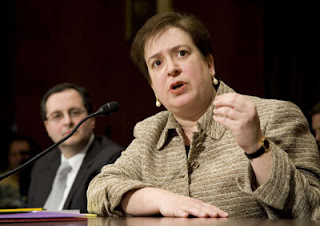 Responding to written questions by Republicans on the Senate Judiciary Committee, Kagan answered "yes" when asked whether she had "reviewed briefs" and/or "participated in some discussions" concerning the lawsuit that resulted in last week's anti-marriage decision. Kagan should be called back to answer more questions about her role in that case.

What position did she take on the DOMA case that resulted in overturning that law, and why didn't she defend it more aggressively? Would she recuse herself when this case, or a similar marriage case, reaches the Supreme Court?

The one-man, one-woman definition of marriage is enshrined in the laws of 45 states and has been upheld by popular vote in 31 states from Maine to Hawaii. The 1996 federal law attacked by Coakley applies this same definition to the 1,138 federal laws that refer to marriage.

It was only six months ago that the charismatic Republican Scott Brown defeated the dour feminist Martha Coakley for the U.S. Senate seat that had been held by the Kennedy family for 58 years. It was a humiliating repudiation of liberalism in its Massachusetts homeland.

Brown's election meant that Democrats lost their filibuster-proof 60-vote Senate majority for the remainder of Obama's presidential term. Pundits predicted that meant the end of Obamacare, cap-and-trade, card check, comprehensive immigration reform and the rest of the "hope and change" agenda.

But the Obama-Pelosi liberals are here for the "long march," and they quickly regrouped their forces. Using unprecedented parliamentary chicanery to bypass Senate rules, they managed to get another version of Obamacare to the president for his signature at the end of March.

As soon as the ink was dry but before congressmen had actually read the over-2,000-page bill, Democrats tried to pretend the debate was over because Obamacare is now the "law of the land." But polls continue to show that 60 percent of Americans oppose Obamacare, including 52 percent who "strongly favor repeal."

Missouri just became the 21st state to sue on behalf of its citizens for a ruling that Obamacare's central provision – the mandate on individuals to buy health insurance – is unconstitutional.

Judge Tauro's written opinion has already been criticized as illogical, even by liberals who support same-sex marriage. But liberal legal scholars are already hard at work developing a better rationale because they are so deeply invested in getting rid of DOMA.

As Justice Scalia wrote about an earlier case, the new DOMA decision is "the product of a law-profession culture that has largely signed on to the so-called homosexual agenda." Kagan on the Supreme Court would permanently entrench what Scalia called the "law profession's anti-anti-homosexual culture," by reading it into the U.S. Constitution.

Elena Kagan has been called Obama in a skirt. Her youth was steeped in the notoriously radical politics of the Upper West Side of New York City, absorbing "progressive" views that are reflected in the theses she wrote at Princeton and Oxford. If confirmed, she would be the sixth justice on the current Supreme Court who was born in New York or New Jersey and the ninth who attended Harvard or Yale law schools.

We hope the senators realize that their vote on Elena Kagan is crucial because she could be the deciding vote on the constitutionality of both DOMA and Obamacare. Despite all her non-answers to softball questions in the hearing, there is no question about how she will vote.

Abe Lincoln warned us that "if the policy of the government upon vital questions affecting the whole people is to be irrevocably fixed by decisions of the Supreme Court, ... the people will have ceased to be their own rulers, having to that extent practically resigned their government into the hands of that eminent tribunal."

Critics fear Kagan would use bench to promote 'gays' - WorldNetDaily